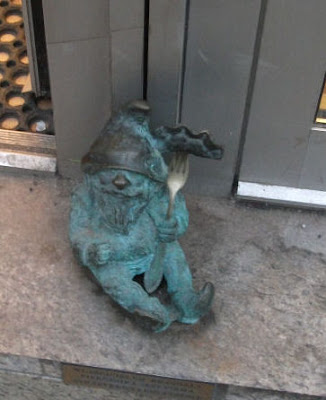 I promised escapades and shenanigans.

Yesterday I got back from Poland. Not just over the river for a drink, but Poland proper. After our drink, I managed to convince my friend, Philip, to forego his last train home and continue drinking at my place. So, the next day, I drove him home to Wrocław - the capital of the Silesian Empire.

In the Selisian museum in Görlitz I had seen the model of the town hall at Wrocław. Now I have seen the real thing!

Like Görlitz, Wrocław is full of pretty and colourful buildings:

You can also climb to the top of a very tall tower in the local church:

And look out across Poland:

One of the most interesting features are the wee gnomes dotted around the streets.

These are The Famous Gnomes of Wrocław:


Let’s take a step back to 1981, when an underground anarchic movement, called the Orange Alternative in po polsku called Pomarańczowa Alternatywa. This non-violent movement arose in Wroclaw thanks to its initiator and leader Waldemar Fydrych. The Martial law had been declared in 1981 by the government in order to fight the political opposition that was rising against the communist rule. In reply to that the Orange Alternative movement started painting ridiculous graffiti of gnomes on the facades of public buildings or to cover up anti-communist slogans on city walls.


Not only that, but they were street entertainers and musicians. Skimming just within the law to oppose the communist regime.

Today, Wrocław is home to the largest international festival of street art, called Buskerbus. During my night in Poland it was my privilege to share a drink with one of the founders, an Orange Gnome (and one time political prisoner) - in a true writer's joint: Art Cafe Kalambur, also affectionately known as The Piano Bar. It was incredibly smoky, the beer was cheap and there was a guy playing the piano in the corner. Brilliant!


Fascinating night. Far too much alcohol was consumed (so just the right amount) and quite a long drive back in the pouring rain the next day. But very much enjoyed the experience.
at 13:12