Sorry for the silence. Got wrapped up in writing - which I'm supposed to do, what with being on a writer's retreat an' all...then decided to take a drive down to Kraków.

My last trip to Poland was really interesting and, since I'm here, I may as well see the places I've wanted to.

Kraków was about a four hour drive south east of here. Quite a road trip. I stayed at a 70s Hostel (more on that to come in a future post) and booked myself on their tour to Auschwitz-Birkenau, the largest of the Nazi concentration camps.

Around 2001-ish, I worked for the Army Youth Services for a summer up in North Germany, and visited Bergen-Belsen where Anne Frank ended up. Incidentally, Belsen memorial centre is run by the same organisation that run the Gisozi Genocide Memorial Centre in Rwanda - the Aegis Trust, who work to prevent crimes against humanity.

Unplanned, yet somehow fitting to spend Rwanda memorial month at yet another site of world remembrance.

Wasn't at all sure what to expect. Hadn't read anything about it. Belsen hardly exists - it was razed to the ground as the Nazis left. The sonderkommando (prisoners forced to work the crematoria) of Belsen kept diaries right up until liberation, but were taken out and shot before the allies arrived. Their diaries were recovered afterwards.

At Auschwitz, the entire camp is pretty much still standing. The gas chambers at Birkenau have been razed, but the one at Auschwitz still exists. Here's a pictorial tour, you can enlarge by clicking on an image: 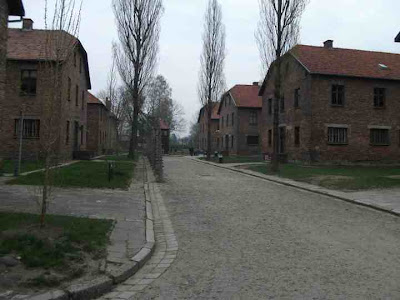 And so ends the first leg of the tour. One of the most haunting images was a glass wall containing two tons of human hair, used in bomb fuses and U-boat officers' socks, cut from the heads of female prisoners. It was starting to grey with age and out of respect we were asked not to take photographs of it.