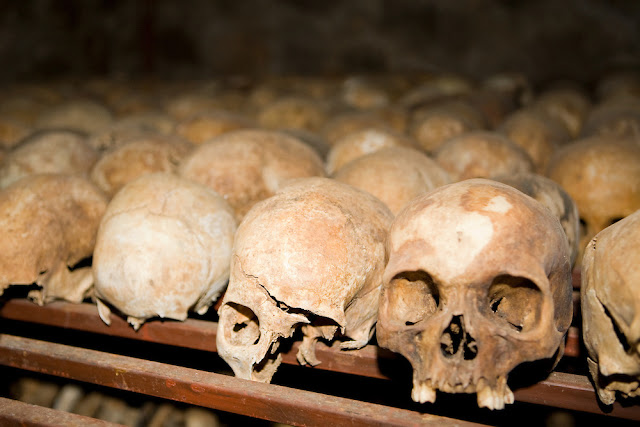 Today we devoted the whole day to genocide. It's late on in the program, but I think it worked better than visiting earlier. Internationals have had time to explore Rwanda and get to know both Rwanda and the Rwandan participants as they are today, twenty-one years on, before diving into the recent past.

I apologise now, I have taken pictures from Google Image because you're not allowed to photograph in the memorials. If you right click on any image and choose Search Google for this image, you will find the original source.

We started off at Kigali memorial, Gisozi. I don't go round anymore. I have a friend who works there so I pop in to say hi, then retire with my colleague for coffee at the café. In 2008 I spent a day volunteering there during Memorial Day, something I'll never forget. They now have an extensive Genocide Archive online, developed with Aegis Trust who are a UK-based genocide prevention NGO, also responsible for holocaust memorials in Europe.

Then it was on to Nyamata Church, where they slaughtered 10,000 people. Mostly locking them inside the church and throwing grenades through the door. 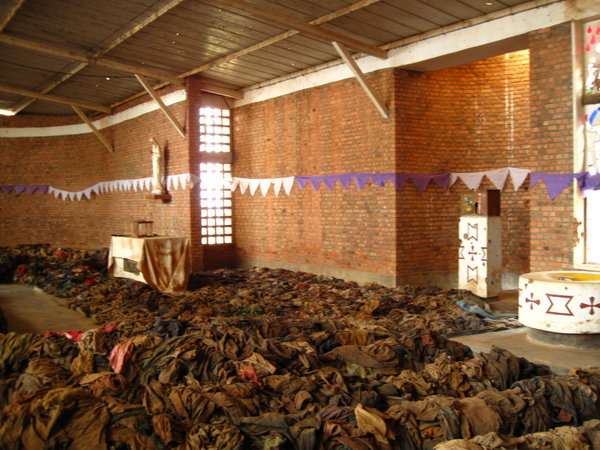 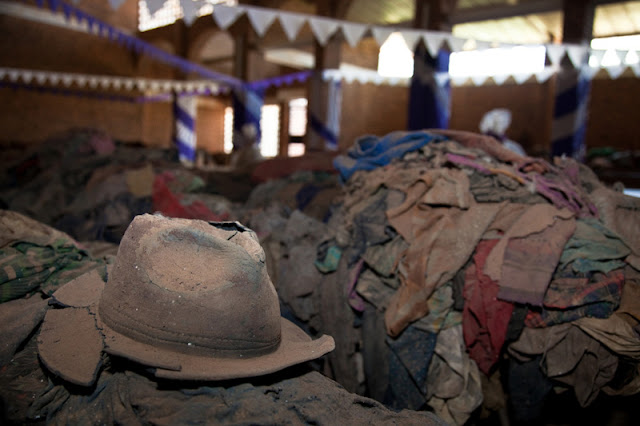 There are bullet and shrapnel holes all over the roof. Piles of torn clothes. They even shot the Virgin Mary because she 'looked like a Tutsi.'

It wasn't quite as graphic as Murambi in the South. I went there in 2008 with Dad and Marilyn. The bodies are still on display. 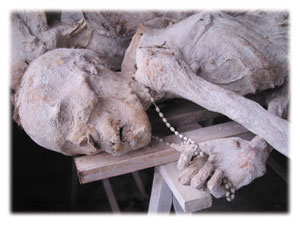 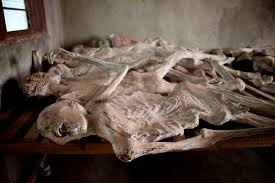 Though, for me, I tend to feel worse about the clothes. People don't really look like people any more after that. As Philip Gourevitch put it (and I could never say it myself if he hadn't), there's a certain beauty to them. They look like papier mâché works of art.

The dead at Nyarubuye were, I'm afraid, beautiful. There was no getting around it. The skeleton is a beautiful thing. The randomness of the fallen forms, the strange tranquillity of their rude exposure, the skull here, the arm bent in some uninterpretable gesture there--these things were beautiful, and their beauty only added to the affront of the place. I couldn't settle on any meaningful response: revulsion, alarm, sorrow, grief, shame, incomprehension, sure, but nothing truly meaningful. I just looked, and I took photographs, because I wondered whether I could really see what I was seeing while I saw it, and I wanted also an excuse to look a bit more closely. - Philip Gourevitch, We Wish to Inform You That Tomorrow We Will Be Killed With Our Families

Clothes on the other hand - clothes seem so much more personal even than flesh. Perhaps it's because there is still colour to them. They seem bright and vibrant. Especially at Gisozi, where they have been illuminated with lights and protected from dust. They look like something you might have hanging in your wardrobe.

I find the horror of the 'unknowing' greater than the fact of death. What I mean by that is that - once you're dead, you're dead. Bones, and even bodies, have a certain serenity to them. Skulls especially, once the expression of pain has been wiped clean. No trace of suffering remains.

But clothes... The problem with clothes, is that someone went to their wardrobe that morning, and they chose what they were going to dress themselves in. A very personal, individual choice. Did they know at that very moment these would be the last clothes they would ever wear? Would they have chosen different had they known? Were these the only clothes they owned? Were these their best clothes?

There's something terribly personal about that. A living decision that died with them. 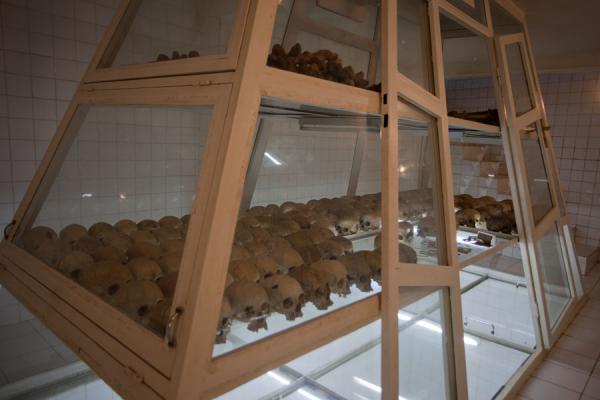 After walking around the main church, you go to a crypt beneath, where there is a glass casement of bones. 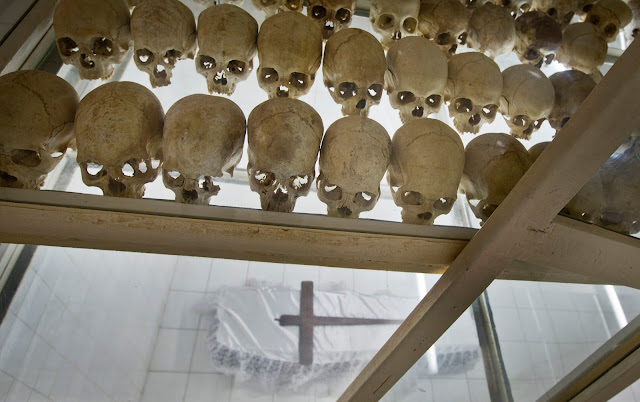 Beneath the casement is a single coffin. This belongs to a woman who was raped by many génocidaires. They eventually killed her by pushing a sharp pole up through her privates all the way to her shoulders. Her body had been on display to evidence the cruelty inflicted, but is now - thankfully - covered. 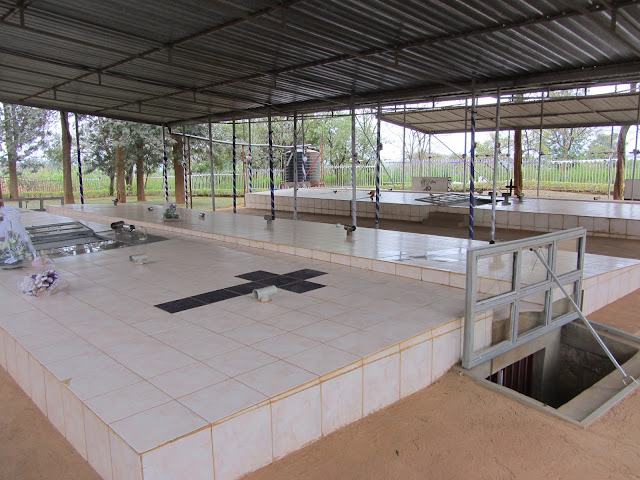 Outside are the mass graves. They are still interring people who are sometimes found in latrines, so many years later. It was common to throw the living and the dead into toilet pits.

Unlike most sites, you can go down into the graves here. There are a few coffins, but many more pieces of people stored on shelves. 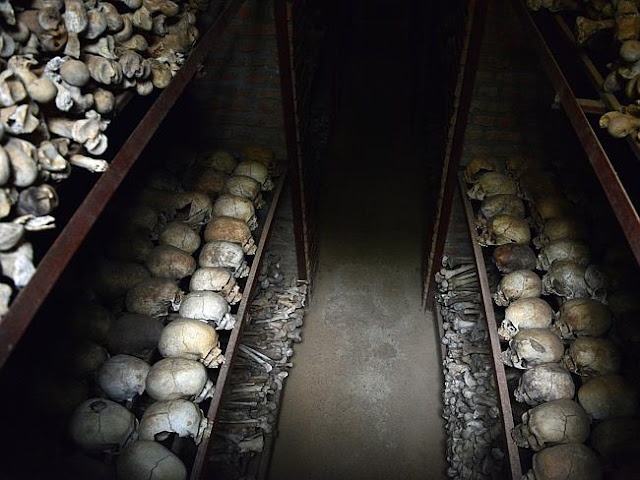 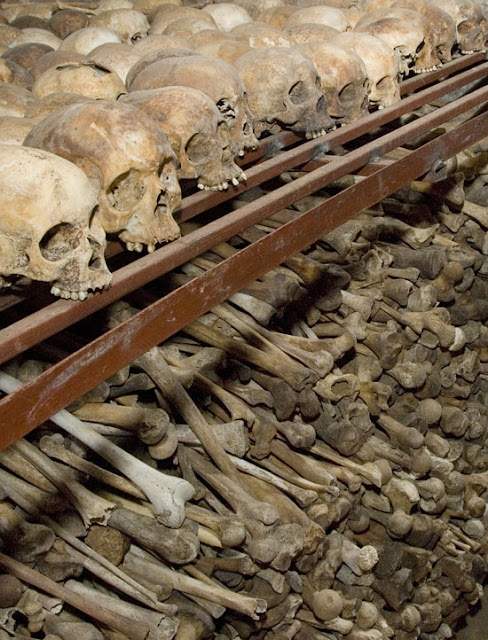 It smells damp and musty down there. Walking back, I found myself thinking about the neolithic and eastern tradition of exposing bodies to the elements. I thought how much nicer it might be to have the sun bleaching your skull, and the rain kiss your wounds, than to be stored down there, never allowed to decay.

I find eye sockets upsetting. Although there are skulls with fat holes through the top, machete slices and entire lower-sections missing, I find myself imagining each skull - only smaller. Say, the size of my hand. Each one of those people were little once. They looked upon the world as children. They saw, they learned, they had hopes and ideas for the future. They took pleasure in small things. I find it very sad to think how little people grew up to experience so much harm.

There is also the grave of an Italian nun gunned down by a government soldier in 1992, two years before the genocide, for speaking out against the killing of Tutsi in the area. Many people don't realise that the killing began en mass in 1959, and, like Nyange School, continued after '94.


Then it was back onto the bus and home to Saint Paul's. It rained heavily for the first time in a couple of months. We had a debrief. People were very quiet. There really aren't any words for it.

I find it difficult. Sometimes participants get very emotional. I don't anymore, I just get a headache from holding it in. It's an affront to the senses. Like anyone living here, you know the stories of your friends, but it's so hard to reconcile the Rwanda around you today, only two decades later, with all that you know, see and hear about '94. If it weren't for the memorials, you'd be forgiven for not knowing it ever happened.

That said, I saw something that really hit me recently. We talk a lot on this program about freedom of speech, democracy, especially presidential terms at the moment. There are many different viewpoints. We were talking with a western embassy official recently whose opinion was, this soon after a genocide, freedom of speech needs to be moderated to prevent a flare-up in ethnic hatred. It's easy - so easy - living here today to look around and see Rwanda as a beacon of development in East Africa. It is. And then you see something like this on Twitter, and it chills you.

Could you imagine replacing the words Hutu and Tutsi with White and Black, Bosnian and Serb, Protestant and Catholic, Christian and Jew? Whatever your political argument, how can you be so negligent of human life?