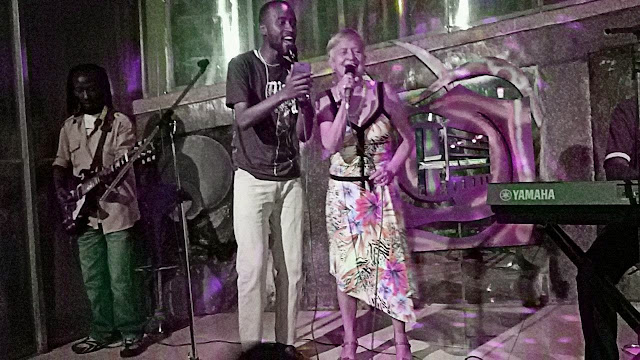 A simple message: Christiane died in the night.

But we go back much further than that. I knew Christiane when she first came to Rwanda. We sat on a Disability Forum each month for over a year. And when I left in 2009, she became mother to my kittens.

When I returned to Kigali in 2014, I was amazed to find her still in the country.

It has all been very sudden. Which in a way is merciful, and in a way very hard to come to terms with.

She died of bone cancer. The part that wrecks me is that she originally came to Rwanda after surviving breast cancer. She said it was a wake up call. That she didn't want to spend the rest of her life sitting in an office. She made that huge life change, and cancer still got her.

Building Macheo Ecolodge on the shores of Lake Kivu was her dream. She came so very close. It was due to open in August, but was delayed a few weeks due to a dishonest contractor. In those short few weeks, she got sick and died.

Since June, I've been guiding human rights delegations about the country. Each delegation spent a few days in Karongi/Kibuye, visiting the Batwa village and refugee camp. Because Christiane was building her ecolodge just over the bay, I took the delegations to visit her, to learn about eco-tourism and Christiane's vision for local employment and locally-sourced food. She loved to cook, and was planning to do lots of it for her guests.

The first time we went was on 1st July. Christiane was fine. She took everyone on a tour of the site and answered questions, laughing. Her usually sparky self.

The second time we visited was on 6th August. The night before, I knew things weren't right. She'd declined the offer of a drink at Bethany because she said she wasn't feeling well. So I hopped on a moto and went to see her at Macheo. We sat with her new manager in her bedroom, sorting out the website. She was so low on energy that she could hardly get out of bed. "Even walking up to the gate drains me," she said.

I asked if she'd prefer me not to bring the group, but she said no. So the next day I brought the delegation and she sat on a chair in the shade to tell them about her plans. I hugged her goodbye and she asked if she could stay at my house in two days time so that she could visit the doctor in Kigali. She always stayed at my place when she came to town. It was a chance for us to sit on the porch with a beer and gossip.

On 8th August I made up the spare room for Christiane. Only, she never made it.

The next thing I know, I received a text message saying 'I'm in the Polyclinic'.

I headed over to see her. Took her a book (she was an avid reader) and some chocolate.

"They say it's low blood pressure," she told me.

She was absolutely wiped. Lying there in bed. But she was still talking and laughing.

We sat for a couple of hours chatting about this and that. Then her husband Baj turned up and Christiane suggested I get a lift home with him. As he helped her to the bathroom, I said I didn't want to put him out, I had a few things to do on the way home. So I gave her a gentle hug goodbye (she felt fragile), and told her to call me if she needed anything.

The last time I saw her.

On the 19 August we had our last text conversation.

It began with me texting: I am in your bed at Polyclinic.

Turned out I had malaria, though I didn't know it at the time.

Her final message, heart wrenchingly, was: So sorry! Hope u will feel better soon. Let me know xx

Her telling me to feel better.

I don't know when exactly she got the diagnosis. She never told me about it. My friend Jo was building an office on part of her land for her tourism business. She went to see Christiane in hospital after I left for the UK. That's how I came to know she had cancer - because my friend e-mailed me.

We were shocked, but even then we were ready to start planning. Christiane had recently become a Rwandan national, and was closing all her accounts in Canada. She'd always said that if she got cancer again, she would have to move back to Canada for treatment. My friend told me that when she visited, Christian was considering treatment in Kenya instead. Either way, she would have had to sell Macheo - her dream - in order to pay for the treatment.

That's where Jo and I thought perhaps we could help. Find an investor, do some fundraising - maybe invest ourselves. Something - anything - to prevent her watching her life's work being sold off. Try to look after it for her until she was well again.

That's where our heads were at when 1:30am yesterday morning Christiane's husband called Jo to say 'she is dying,' and soon after 'she is dead.'

It all happened so quickly. She was walking around fine on 1st July, and dead on 23rd September.

I was driving yesterday when the radio announcer said, 'It is the Autumn Equinox today. The end of summer.'

At times it felt like Jo, Christiane and me were the Three Musketeers. Building our lives in Rwanda together. Looking after each other, looking out for each other, laughing off troubles over a beer.

I was prepared to help look after her when I got back. But I'm not sure I'm prepared for her never to call again and ask for a room, or invite me for Chinese, or text to rant about the builders.

It feels like someone cut off a sentence midway. 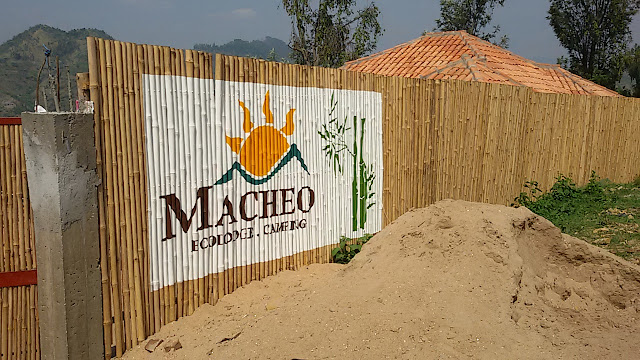