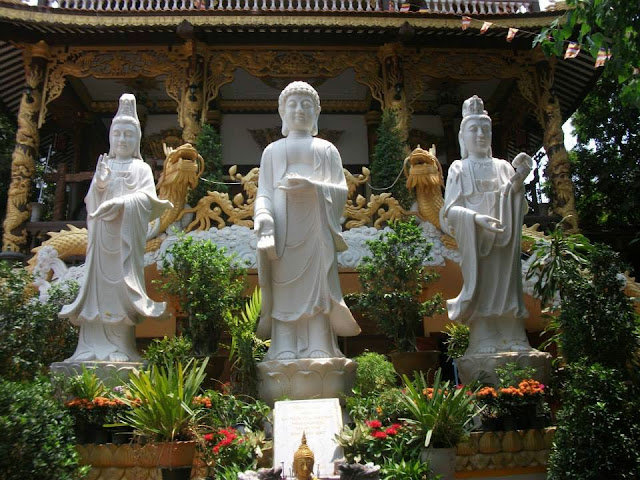 Our lucky seventh, and final, wat of Pii Mai was a hidden-away Vietnamese temple on the route home. It was a towering pagoda, which I couldn't get in one shot. The Buddha at the very top can be seen for miles. At the base of it were tall marble statues, with large vats of flower water beside them for wetting.

Martine & Ruairí wanted to show me a Vietnamese temple so that I could contrast the styles, and they are very different.

On the first floor, the main temple is guarded by these weighty fellows. Their moustaches and beards are made from real hair (of what, I'm not too sure). 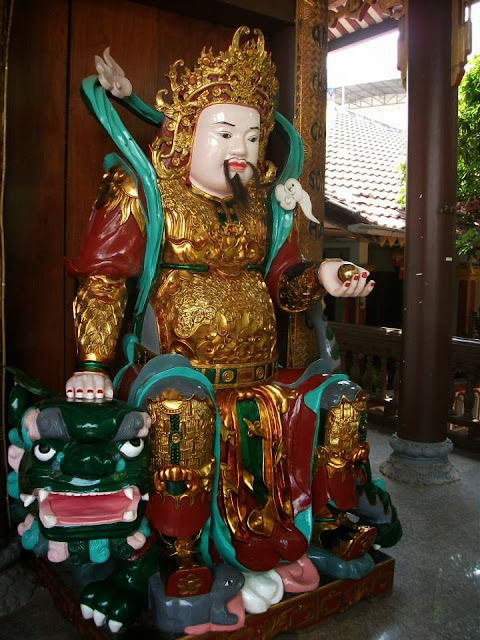 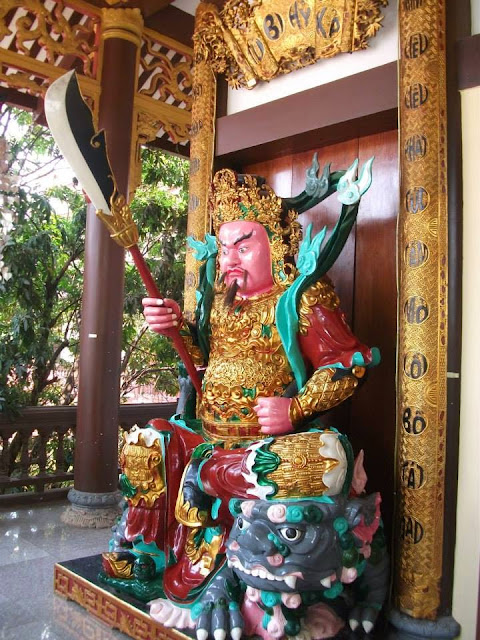 The temple itself is breathtaking. Giant golden Buddhas, rather different to the ones we had seen in the Lao temples. 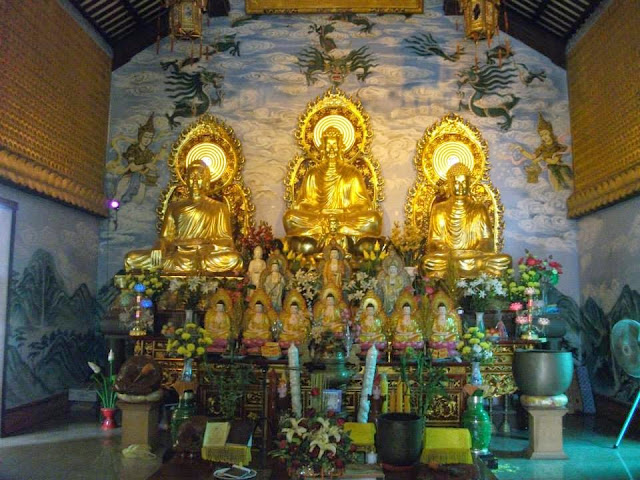 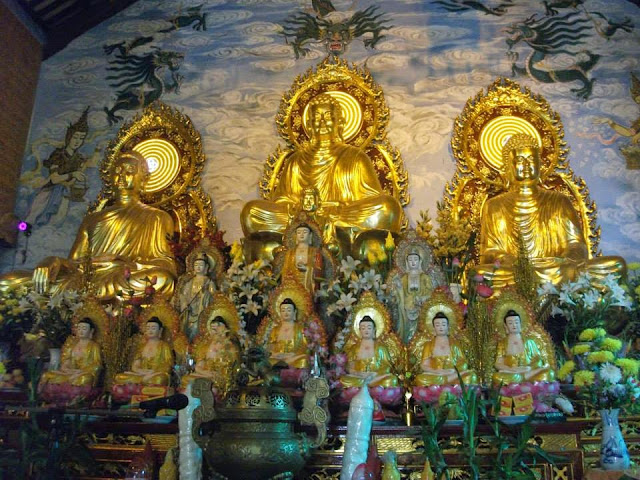 There was a prayer book beneath the shrine, and I took a sneaky peak inside. It seemed to be filled with mantras for meditation. 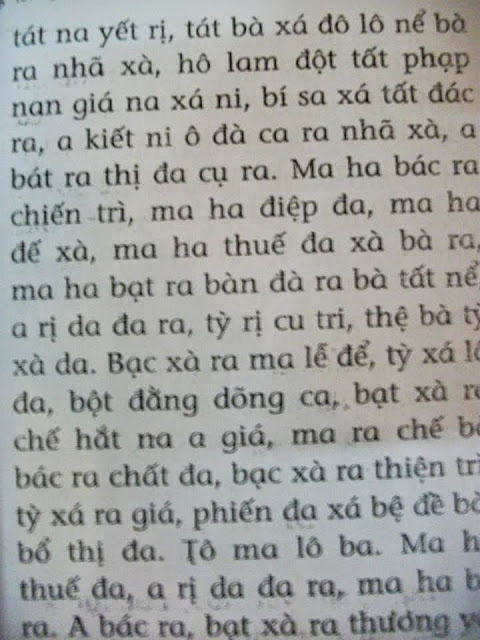 I was suffering the initial stages of sunburn by this point. I've been using a P20 once-a-day spray, but it was blisteringly hot and we had been in the sun most of the day. I don't think it was designed for Laotian weather, and I probably should have picked a higher factor.

I was starting to feel slightly fragile, and the cool shade of the temple was making me feel much better. But there was an elderly Vietnamese lady there. She tried to talk to me for a good ten minutes or so, but I didn't understand. I thought perhaps she was also speaking a little French, but Martine later confirmed that she couldn't understand her either.

She seemed a nice lady, but she kept chasing me around the temple. I'd be quietly looking at something, and she'd appear. I rested to gather my thoughts, and there she was again. She sort of ushered me out of a side door in the main temple, and I thought she was telling me where M&R had gone, but I found myself in a completely different place: a white room with two shrines. 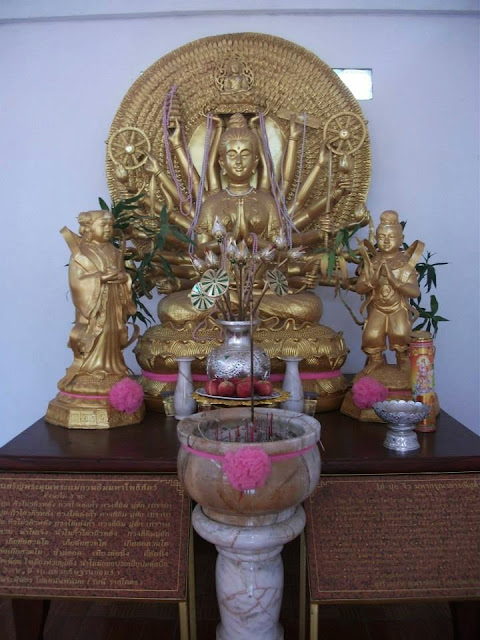 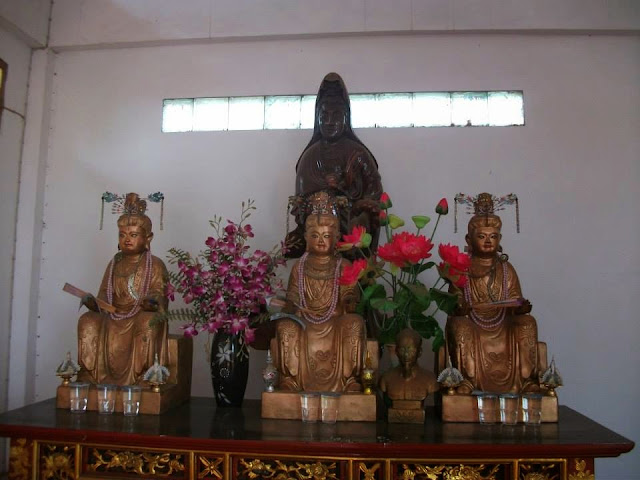 I was feeling a little tearful by this point. Partly from the exhausting heat, partly because I hadn't eaten much (because in the heat I don't feel hungry, so forget), partly because I never do any exercise (it's a shock - and my bottom was sore), and partly because there is something quite odd about the temples, they seem to tap into something that can swing between incredible joy and slight wobbliness.

Seeing the above shrine, I decided that I wanted to light some incense, because it's rarer to see female icons, and I liked the look of them. So I made my donation, took out some incense, and then realised the box of matches was empty.

I felt ridiculously sorry for myself.

Over the next ten minutes I went through a bizarre range of emotions: self-pity, determination, triumph, as I marched back down to the main temple, lit a devotional candle from the one already burning, marched back up the steps (protecting it from the breeze, whilst it dripped all over my hand) and lit two sticks of incense, one for each shrine.

Feeling a bit better, I went in search of R&M.

I found Ruirí sitting outside the main temple. He told me Martine had gone up to the top, so I decided to follow.

There's about seven or eight floors, each one accessed by wooden steps that get progressively narrower the higher you go.

The room at the top was very tiny, and at first I couldn't see Martine. Then I found her, hidden behind Buddha's knee. We sat at the top of the pagoda for a long while, enjoying the view and the breeze. 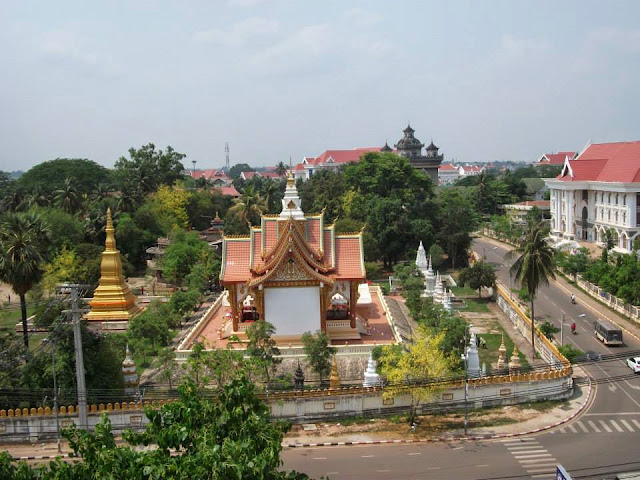 It was so peaceful up there, and before making our way back down we had a big life-affirming hug.

On each of the levels there is a giant Vietnamese Buddha, each one sporting a swastika, which we haven't seen on the Lao Buddhas.

Swastikas are an ancient sign of good luck (which is slightly ironic in hindsight), and have been used for thousands of years from India to Armenia. 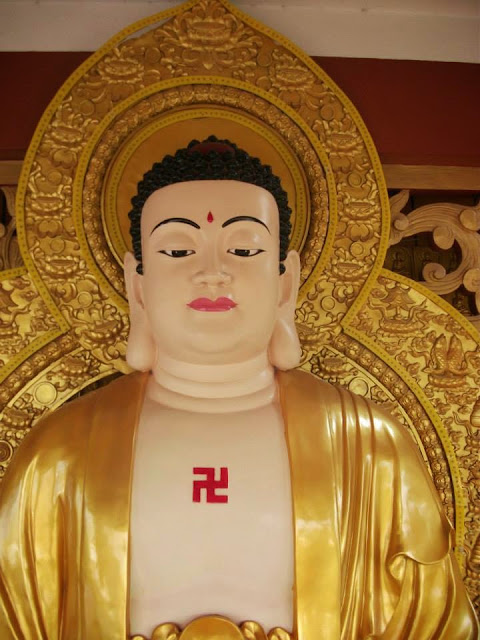 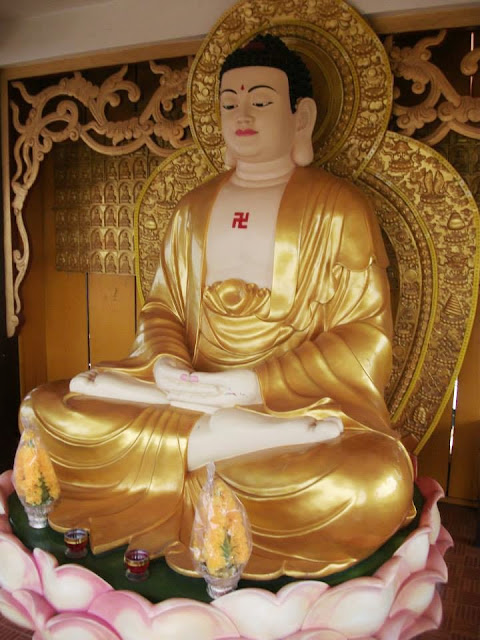 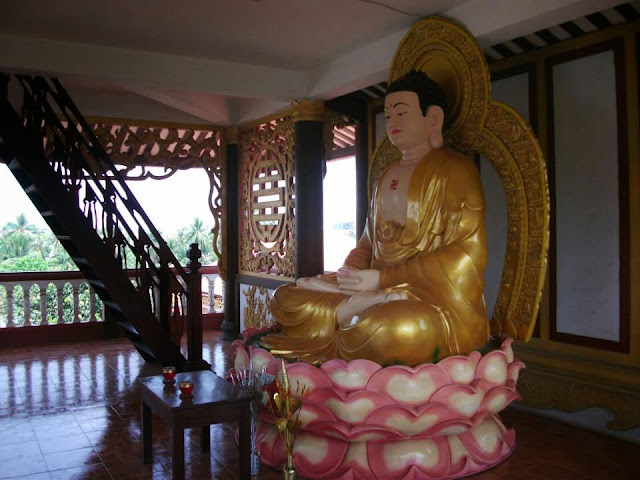 There was also a traditional drum which you see in towers beside most temples, used to guide the monks' chanting. Bells are also common, too. 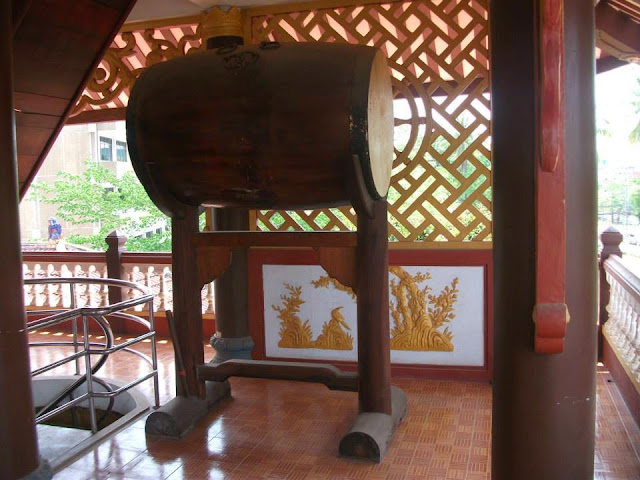 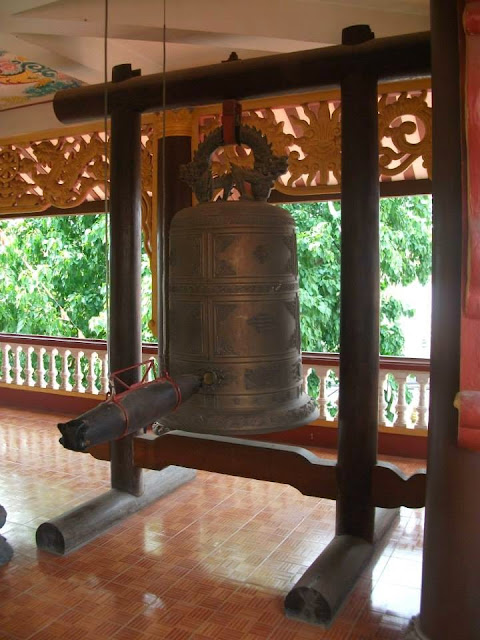 The first and last thing you see as you enter the temple is this rather imposing, many-handed god, behind which an unbelievably life-like statue of a Buddhist monk sits in meditation, like something you might find in Madame Tussauds. Perhaps he's there to dissuade people from stealing from the altar? 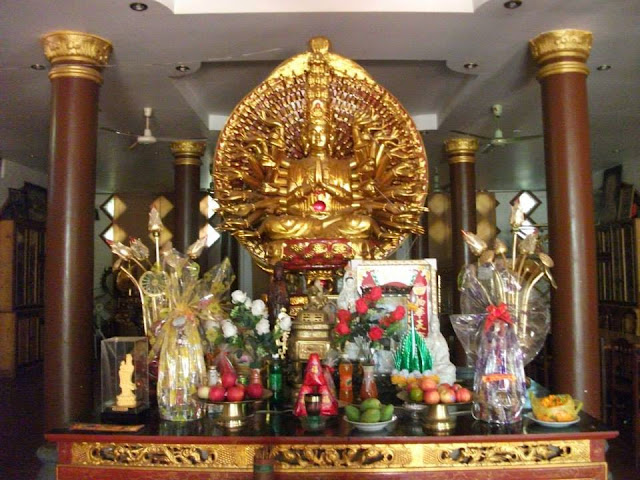 And so ends Pii Mai. It's been a wonderful introduction to Lao. I was fairly exhausted by the time we got back, sopping wet, having been ambushed a couple of times with buckets of water. Ruirí was magical, cycling off in search of street food for dinner. We're taking a day off tomorrow to recoup. Some friends of M&R's are over in the evening, so Ruairí is spending the day cooking and I'm likely to spend it updating this blog.

Wishing everyone luck and happiness for the year ahead!