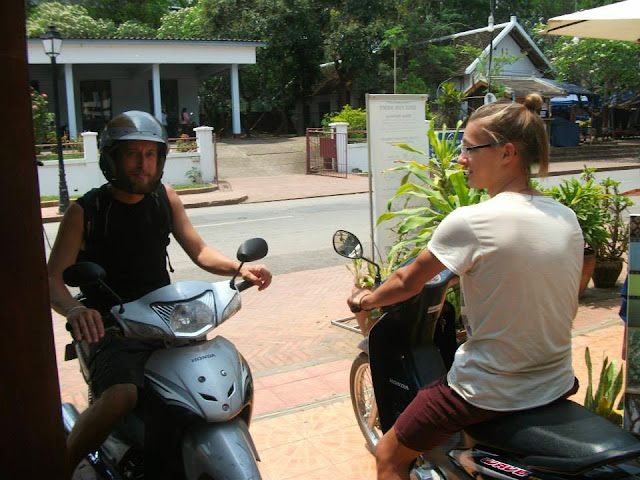 Lots more moto fun with Remy and Jonas. We headed about an hour out of town to a place called Kuang Si Falls. It was utterly incredible. Think I found the definition of heaven.

There's a bear sanctuary as you enter, where they have a range of Asian Black Bears. 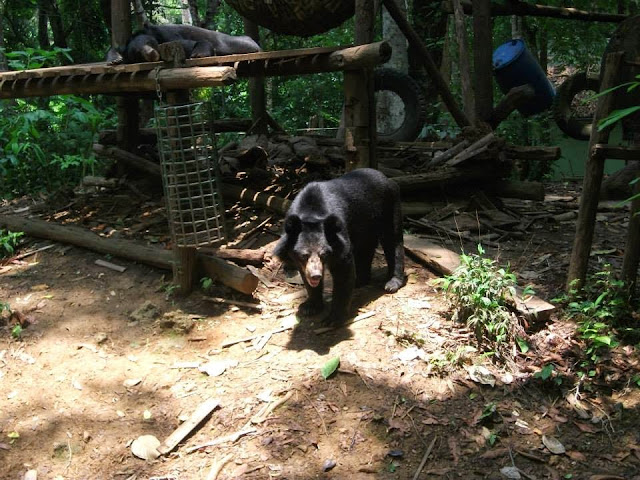 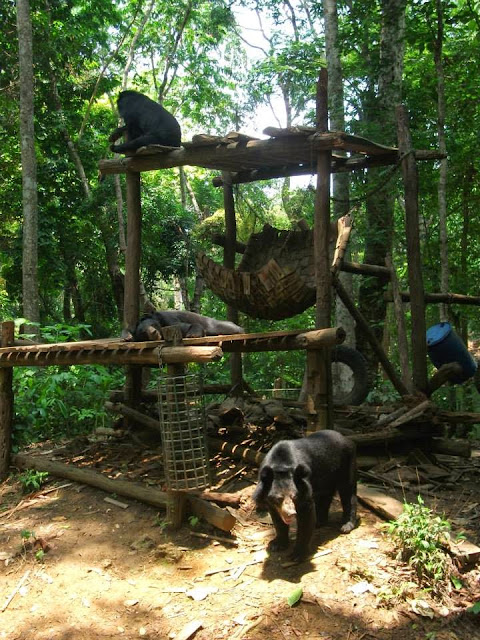 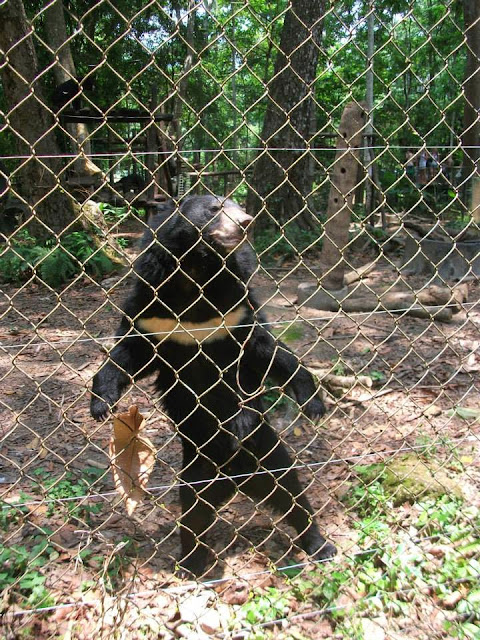 Then it's on to the waterfalls: a sequence of falls and pools which are the most incredible bright blue, where you can swim and splash about 'til your heart's content. I've never seen anything like it. Hope I'm reincarnated as a water sprite here. 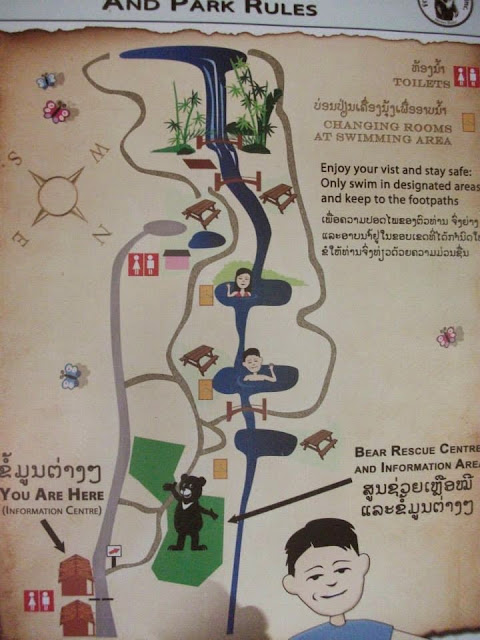 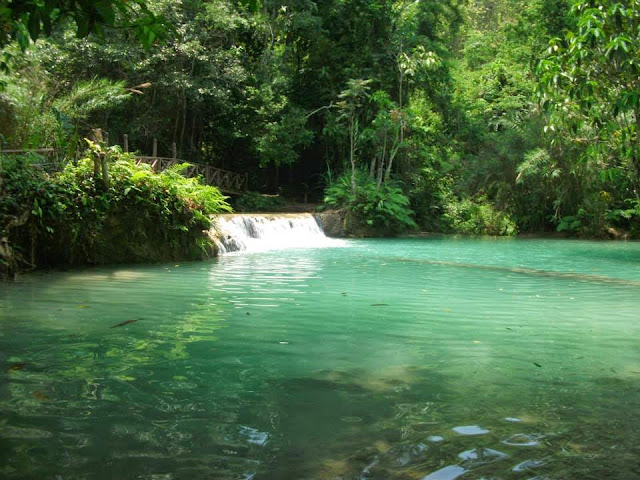 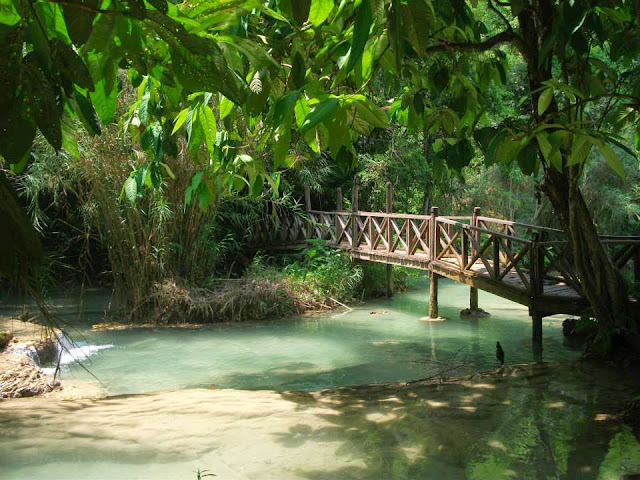 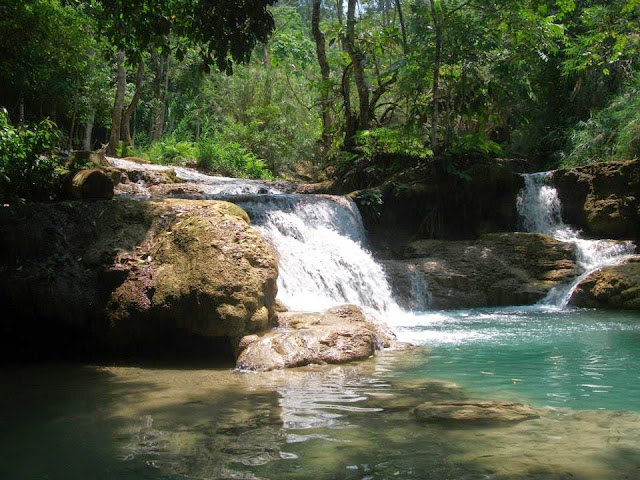 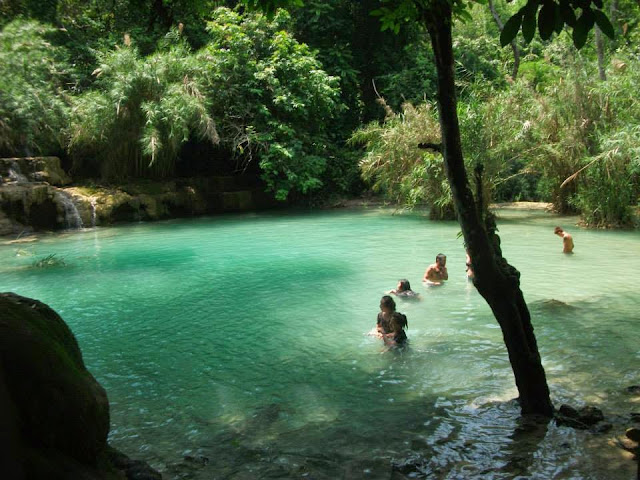 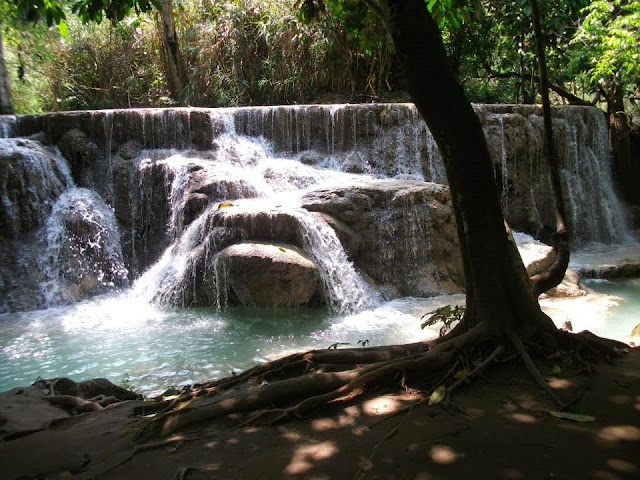 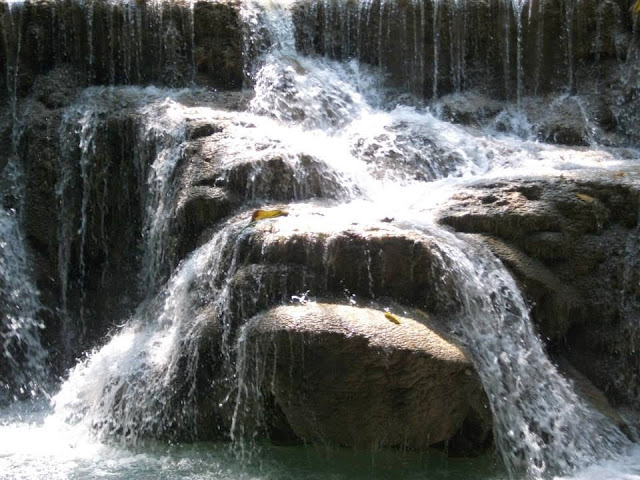 I had my second 'moment' here. I love standing beneath waterfalls with the water drumming so hard in your ears that you can't hear anything. If you press your forehead to the rock, you can keep breathing whilst completely submerged. I started humming into the rock, resonating sound whilst the water roared in my ears. Stayed that way for a long time, by whole body buzzing with not a thought in my head. In the midst of such noise was the most intense silence I've ever known. When I finally swam away, it was as though I had been completely cleansed, leaving a deep sense of stillness and peace.

Looking back, there was a bit of a three-stage transformation going on. Struggling and wrestling with emotions at the Vietnamese Temple, awakening at Wat Tham Phou Si, and peaceful emptiness at Kuang Si.

These sensations never last, you can't hold on to them and say 'from this point on I am calm,' but those small moments leave a footprint, and for that moment they are the most sacred of experiences. If we are lucky, our lives will be filled with little moments.

Meanwhile, back at the bench, Jonas was chillaxing beneath a shady tree, and Remy was exploring the rocks. 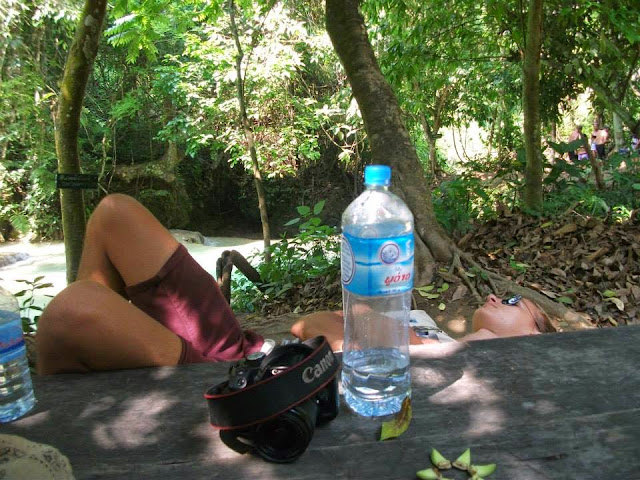 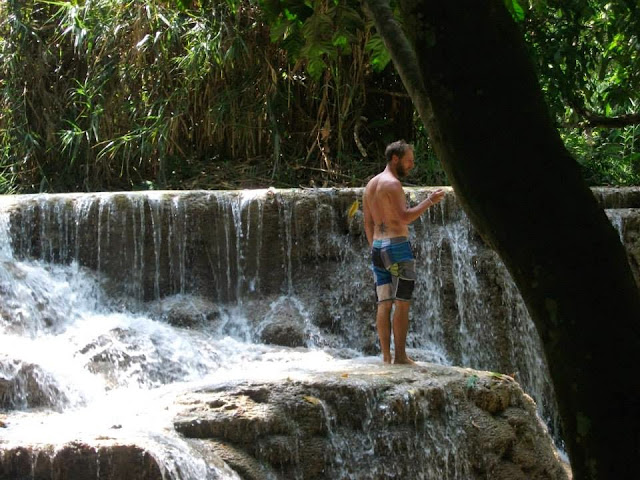 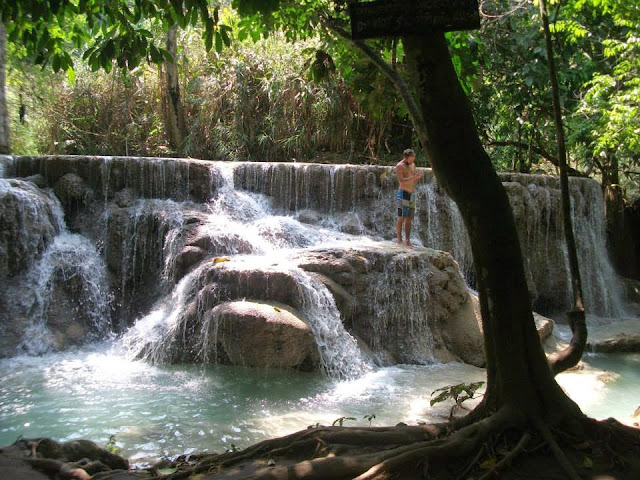 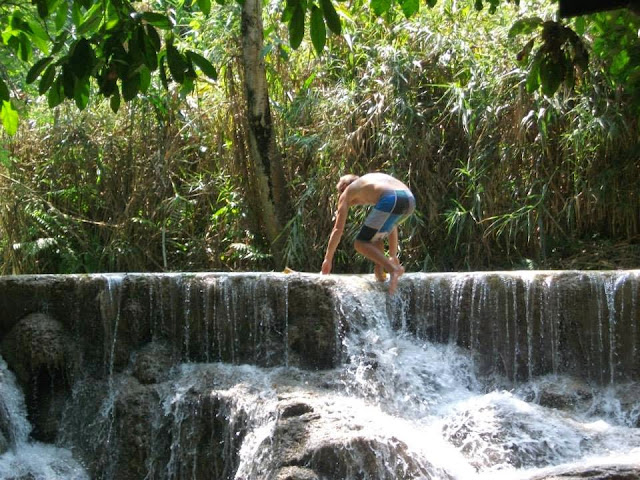 We left Jonas sleeping and decided to continue up the river, past a little waterwheel, to see where it led. 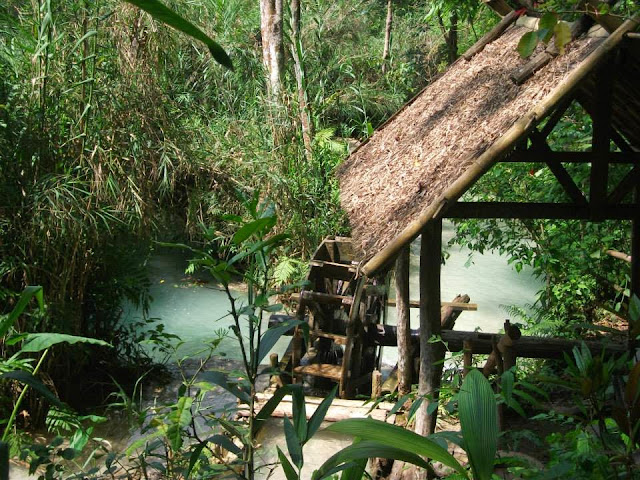 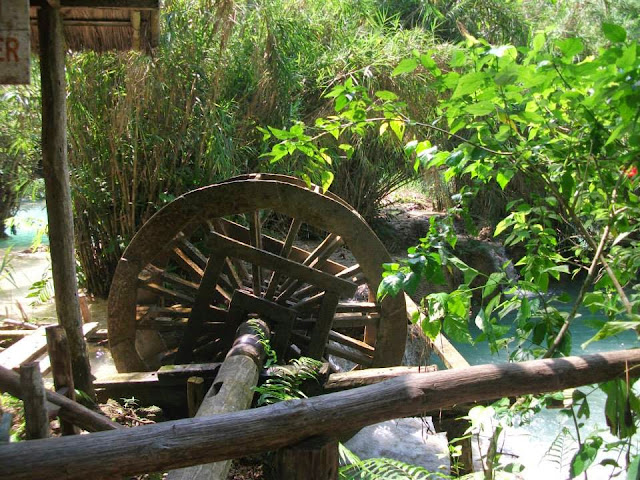 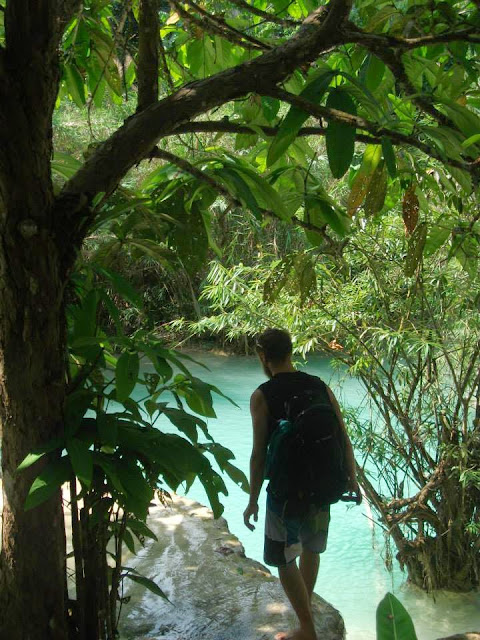 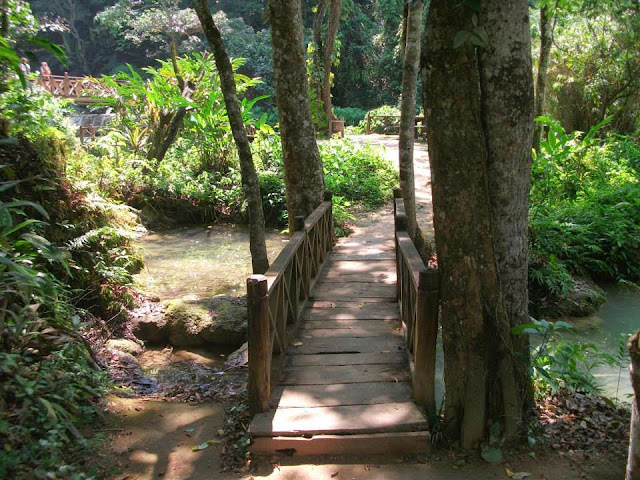 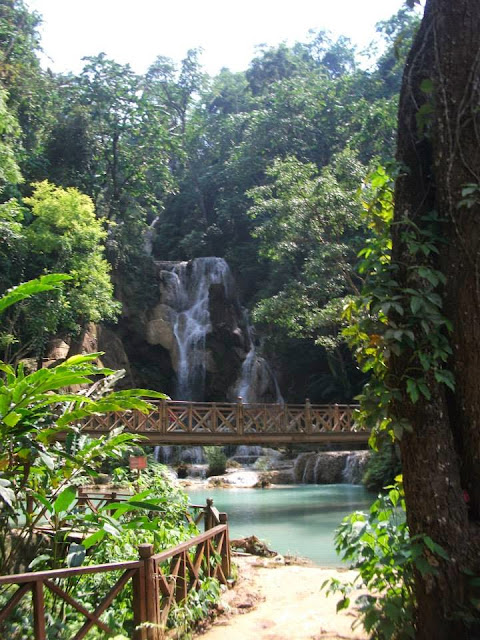 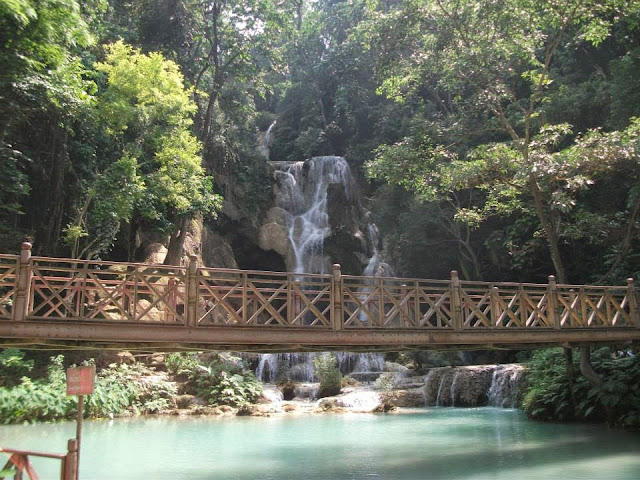 There was a giant waterfall at the top. It dwarfed everyone standing next to it. There was nothing for it but to climb to the top! So, once again, I found myself following Remy up a very, very steep hillside. There weren't exactly 'steps' this time, more sort of mud and rocks. It put me to shame. Even when I was fit, back when I was scrabbling about Scotland with Paul last year, I was still nowhere near as fit as these guys. Remy is my age, but there isn't an ounce of fat on him. Halfway up the hill we were overtaken by a couple of European blokes who were walking up like it was an escalator! Backpacking seems like a valid alternative to joining a gym.

I didn't take any photos from the top as you had to wade through a pool across extremely slippy rocks, and I was worried I might drop my camera, but I will include some at some point, once Remy uploads his photos (which may be a while, internet being what it is).

It was completely worth it, and I almost died of relief when I saw people bathing at the top. After washing off the sweat, we looked around then began our descent down the other side of the waterfall, which was much easier going with a flight of stairs. 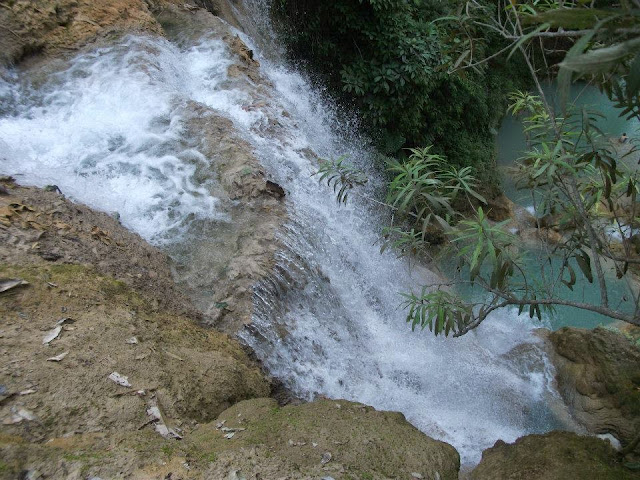 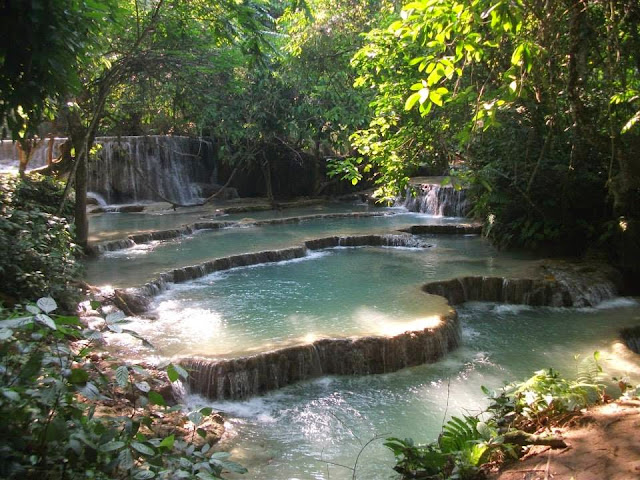 Kuang Si is one of the most beautiful places I've ever seen. We got to the bottom absolutely knackered and promptly threw ourselves back in the pools to cool down, with the foot-nibbling fishies and the little scuttling crabs. There were quite a few tourists there of every nationality, but it didn't feel crowded. I am so grateful to have met Remy, taking a moto meant that we got to spend the entire day there exploring and swimming, rather than rushing round with a tour guide.

Jonas had already headed home by the time we got back down, as he was still suffering from his cold, so we grabbed some food at the market before starting the journey home. On the way we saw this incredible cyclist. We overtook him going uphill, then he overtook us and managed to completely out race us for about a mile or more! I took a brief clip but I'd maxed out my memory card so it's only short. I gave him a big round of applause when we eventually overtook. He was truly impressive. 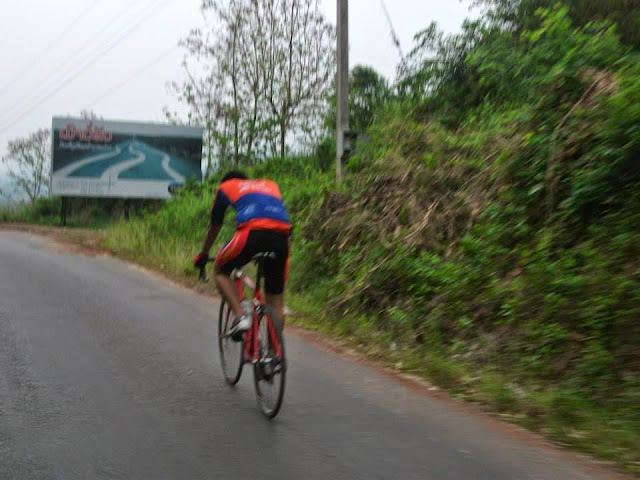 Tomorrow I head for home, but there's plenty of fun to be had between now and then. I feel utterly rejuvenated.
at 22:50