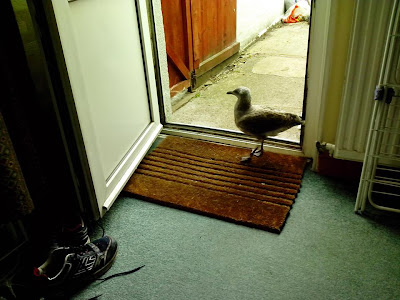 After the hedgehog visitation, I opened the back door yesterday to find a seagull staring at me.

The strange little mite kept running up and down the garden, and in and out the house! He seemed to want to get onto the garage roof, and kept expressing this by flying into the greenhouse. Wore himself out.

Opened the door this morning and Jonathan Livingston was still there. 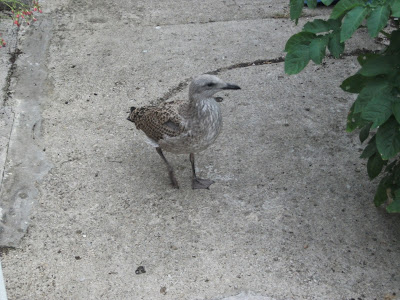 Popped to the shop and fed him sardines. 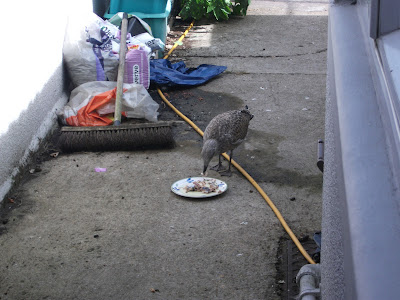 He was soooo sweet and trusting after that. Came to stand next to me to tell me he wanted to go on the roof again. At which point, I pounced.

He squealed as I put him in the box.

I felt like the most awful human being in all the world. Not felt that guilty since I took Mao to get his balls chopped off.

Poor Jonathan. He threw up his sardines as we drove him to the docks. When we got there, we let him out. He wandered calmly up the dock, then part way back. There were loads of other young gulls on the water, but it was a little far down. He kept leaning over and looking down.

Eventually, he spread his wings and flew to join them. We gave a little cheer, and watched as he washed the vomit off. All the others loved him. He must have smelled like a five star meal!

Think he got stuck in the garden because it's quite an enclosed area and he needed a run-up. So sad to see him go, but happy he was happy. Hope he has a long and happy life.
at 22:10

Email ThisBlogThis!Share to TwitterShare to FacebookShare to Pinterest
Labels: Random