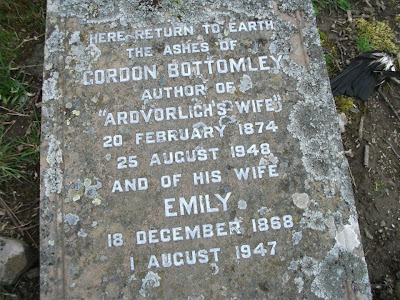 Dear readers, I would like to share with you one of the strangest things that has ever happened to me.

It all began last May, with The Curious Incident of Dundurn, Part I, in which I experienced a minor mental meltdown whilst walking the last seat of Pictish power with my friend, Paul.

That in itself was so strange that I rolled up my sleeves and went back there - alone.

Yeah! Take that hill(s)! You have been walked!

Bloody knackered, I arrived back at the old church at the bottom. As you already know from this blog, I'm a bit of a gravestone junkie. I love unusual stone carvings and weird little epitaphs. Which is why this one caught my eye.

Seriously - who gets buried with the name of their book on their headstone?

Being of a literary bent myself, I made a mental note to track down the title and have a read.

Then forgot all about it until the other night.

Approaching the witching hour, I looked up Gordon Bottomley on Wiki, and immediately found myself hooked.

There are approximately 660 words written about Gordon Bottomley on Wiki. Within those 660 words I discovered:

Coincidence. All coincidence, I know. It took me a while to notice on the gravestone that we share the same birthday!

Thoroughly intrigued, I ran a search on Amazon and ABE (oh, sorry, what's that - same thing?) for Ardvorlich's Wife and was a little perplexed when I couldn't find the title. There isn't anything you can't find on at least one of those sites.

I tracked down the e-mail address for Crieff library, which is the next village across from Dundurn, and sent them a little message asking whether they had a copy. A response soon came back, from a local historian. Here follows the conversation:

...Bottomley’s Perthshire connections are obscure. His mother’s surname was Gordon and she apparently had Scottish ancestry. She wasn’t born here though and I doubt that any of his family is buried near Dundurn. He certainly liked Dark Age subjects and legend says that Dundurn was the scene of certain struggles between the native Picts and incoming Scots. He wrote about Gruach, the historical Lady MacBeth, who appears in several romantic works and is sometimes claimed to be among the last of the Pictish royalty.

One of our previous librarians must have been aware that Bottomley had some significance to Perthshire because we keep three books of his. We only do that if an author is from here or writing about the place. “Ardvorlich’s Wife” is a short verse play that he published in a collection called “Scenes and Plays” (Constable & Co, London, 1929)...

Your original attachment hasn’t been forwarded to me, so I haven’t seen the gravestone. Does the inscription definitely indicate that his body is there? Quite a lot of monumental inscriptions – even the ones in graveyards – commemorate people buried elsewhere.

If it does say that he is there, it all gets a bit mysterious because I am fairly sure Gordon Bottomley didn’t die in Scotland. The registrar certainly does not seem to have recorded his death. I have seen some evidence though that he actually died in Wiltshire in 1948. It is possible though that his ashes were scattered in Dundurn at a later date or maybe he was even reinterred (though that sounds a bit drastic).

...Funny you should mention the commemoration stone issue. I was actually caught out by that quite badly. My friend and I drove past an old graveyard in a field and stopped to take a look, as the gate had fallen off. It was completely overgrown and rather mysterious. We brushed aside one of the trees to reveal the headstone of Archibald Campbell Tait, "12 years Bishop of London" and "14 years Archbishop of Canterbury"!

We were astonished to find the grave of such a prominent character so discarded. Thankfully I took a photograph, but it wasn't until we got back that I noticed the important words "laid to rest with his wife and son," who were buried in London.

Still, the wording of this one looks fairly interesting?

What do you reckon?

I saw the attachment and it looks pretty clear that the grave contains his and his wife's ashes. The inscription was evidently made well over a year after the death of his wife Emily (Burton). I reckon their ashes must have been brought up from England and re-interred in accordance with his wishes. There is no doubt that he died in Wiltshire. I confirmed that from the Dictionary of National Biography.

The reason that the monument celebrated the obscure work "Ardvorlich's Wife" is because of its local significance. If you check the attachments and this link then it all becomes clearer.

The text of "Ardvorlich's Wife" is prefaced by the attached extract from Scott's "Legend of Montrose". It's a horrific tale!

And one that I cannot wait to read, having now been able to source a copy!

So, Gordon Bottomley, we now know where you rest, the mystery has been solved and I shall add it to Wiki shortly, along with our birthday.

As for the graves in the yard, I'm going to reply briefly to mention that none of the graves, despite looking like an ancient graveyard, seem to be as old as the stones would suggest. It was something that caught my attention the first time I visited, and made reference to in my adventure video. I think that there's more than a few unsolved mysteries there. Paul reckons it may have been built on a stone circle. Apparently that's a common feature of churches with circular walls.
at 11:28