Nekkid in the North Sea 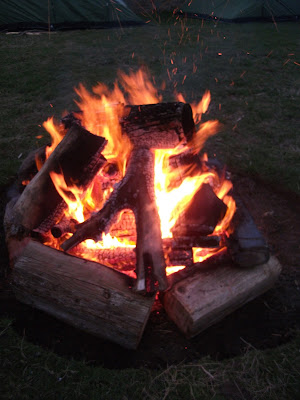 In a slight interlude to the Dundurn saga, of which there is a second part, Paul and I spent a fantastic Beltane in Fife with friends. It's always an honour to be invited along to one of J&K's sabbat festivals, they're known throughout the UK Pagan community. I was last there three years ago for Samhain, after I'd just returned from Africa. I spent most of it sitting around the fire shivering, so it was really lovely to fully participate this year.

It was also nice to have the chance to introduce Paul to a few faces. He moved up here about a year ago, and a few of the Fife lot live not too far away. It's always good to expand the network of friendship.

We arrived on Friday night, via Auchtermuchty, to pick up a tent from a friend. There were only a handful of us the first night: Free, Hawk, Kit, Fred and Ayla. We had a lovely time melting marshmallows over a fire in the conservatory and washing them down with large amounts of wine.

As there were so few of us, there was enough room in the house, so I enjoyed the luxury of the sky room all to myself! 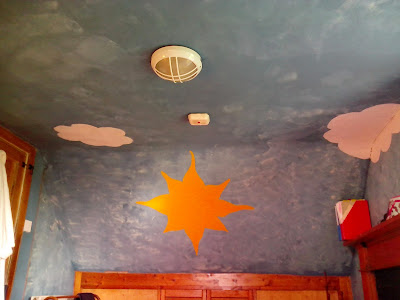 The next day lots more arrived, around thirty in total. We all had jobs to do. Kit and I collaborated on digging the fire pit. 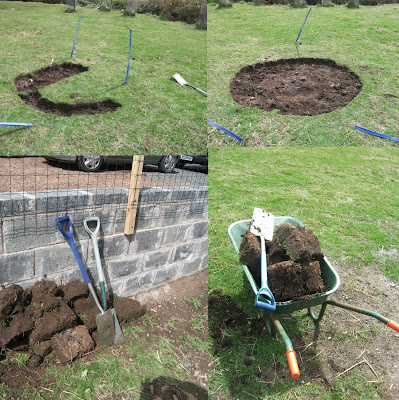 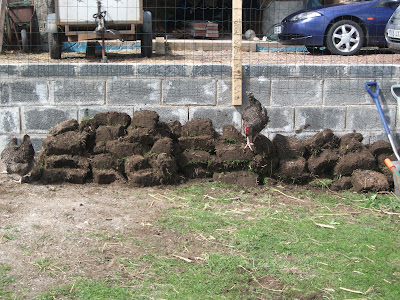 Some set about making the decorations for the maypole. 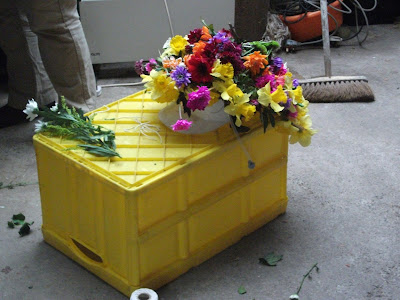 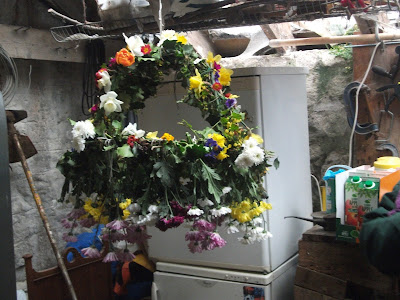 Others set to in the kitchen, the heart of the home. 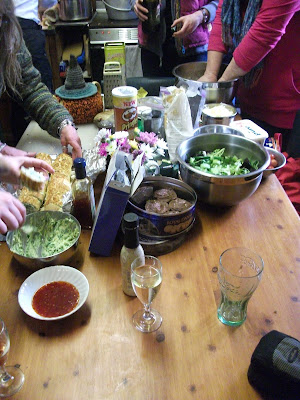 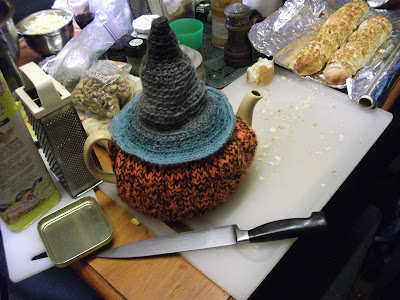 There was one other job that needed doing, which was quite special. We needed to sheer J&K's two ewes. Only, we had to catch them first!

I had a go at sheering my very first sheep. It's actually pretty hard, and I didn't do it for long as I accidentally nicked its leg. The sheep didn't seem to notice, but I felt so guilty I handed the sheers back and took to wrestling its head against the floor. It took three people to hold it down whilst J sheered. 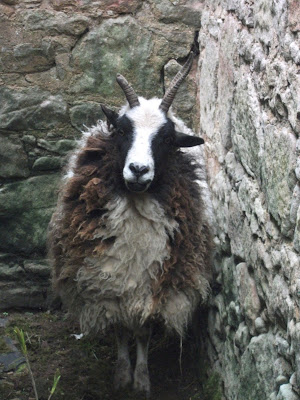 That night most people gathered around the bonfire, but Fred, Hawk, Michael, J and myself adjourned to the hot tub to drink whisky and mulled wine beneath the stars. Absolutely heavenly.

We all headed to bed at a reasonable hour though, as Beltane ritual began at 4am!

I felt as though I'd only just closed my eyes when I heard the drum banging through the thin sheet of my tent. 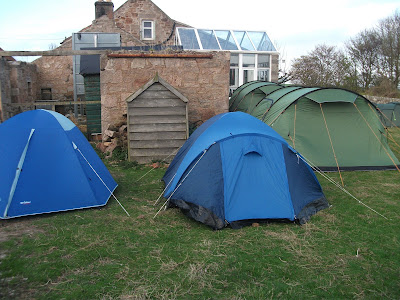 There was a mad scramble for the kitchen, where we grabbed whatever was to hand before marching off to war for Winter or Summer. We convened on the battle field, in our straw crowns and ivy crowns respectively. I picked Winter, as I'm a winter baby and I prefer the cold to the heat. We stood our ground on the hill and chanted whilst the Summer army approached, interweaving our chant with their song. Our respective Queens picked a fight and we all joined in with wooden staves.

Predictably, Summer won, to a cry of "I demand a rematch, I'll see you again in six months."

Then there's a dance, where everyone holds hands tightly and the leader weaves the line around the garden in a sort of labyrinth, so at times you're face to face with a line of people going the other way. This circles the Bel fire and ends around the maypole.

The Bel fire was lit a little earlier, as the sun began to rise. 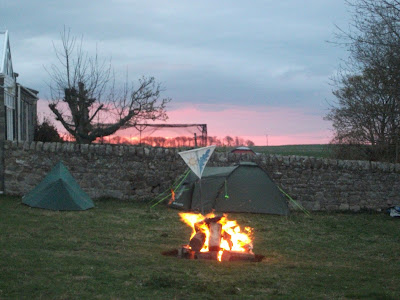 Then it was time to weave the maypole.


First the maypole is spun, weaving together the energy of all the people dancing. Then it is un-spun, releasing that energy back into the world for the year to come. 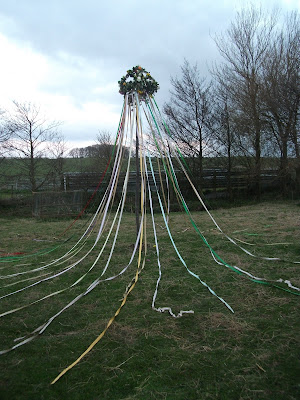 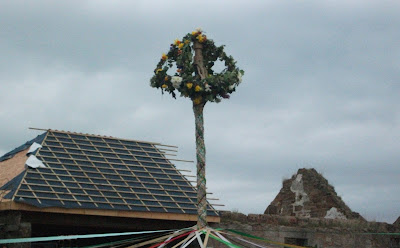 Next came the Green Man, a young lad who volunteers to be dressed with the horns and an ivy-leaf suit. He chases the women and they try to pick the leaves from his coat until he collapses. Beltane is about fertility, so for the women who take part it's about reclaiming their fertility. On a broader level, Beltane is about sex, lust, and that little spark that spins the earth on its axis. 'Chasing the Green Man,' or the 'chase into the Green Woods,' is a euphemism for less formalised Beltane celebrations where partners tend to disappear for an hour or so. If you're trying to wake the sun, it helps to make the earth move.

We walked down to the Grove, where we took part in supping from the cup, and libations. This was taken from a bottle of K's very special Hawthorn wine.

Then it was time to jump the Bel fire. Which is another tradition for good luck and good health in the year to come.


It was quite a big fire. You really had to take a run-up.

That marked the end of communal ritual. It was a Wiccan ceremony, which is a branch of paganism widely practised in the UK. It's fairly representative of the kind of activity most pagans get up to around the British Isles to mark this time of year. Beltane is one of eight festival days, and one of the four Major Sabbats, or Celtic Festivals, alone with Imbolg, Lughnasadh and Samhain, the last being our New Year. Beltane marks the beginning of Summer and celebrates sex, life, and creation. Samhain (pronounced saw-in) marks the beginning of Winter and celebrates death and the ancestors.

Most people who aren't Pagan tend to think Summer Solstice is the biggest of our festivals. It is big, but these are bigger. Almost everyone does celebrate Summer Solstice, though it's more known for its place within the Druidic traditions, and is, to some people, one of the four lesser, or minor, sabbats, even though it's generally far bigger than the other two Major Sabbats of Imbolg and Lughnasadh, which tend to be quite quiet as far as public ritual is concerned.

For me, my communion was about to come. Just after ritual finished, about a dozen of us piled into cars and headed for a deserted stretch of beach on the North Sea. There, as the sun rose golden above us, we stripped off and ran screaming into her freezing waters.

Myself and the Green Man were first in. With a nod of agreement, we turned to face the tide, put our heads down, and ran full-pelt. We didn't stop until we fell over. It. Was. Brassic.

I swam quite a way out. A little like Dundurn the other day, I was observing my body's reaction. It was so cold that my hands had gone completely numb. I was aware of it, but at the same time I didn't really feel it. All I felt was perfect calm as I lay, floating, looking up at the cold golden sun. It was absolutely fantastic.

That is god. Raw and eternal.

We got back to the house, started on a proper breakfast and huddled around the fire to wake and sleep in shifts. It is known as 'the never-ending day'. All sense of time is completely lost. You're either eating, sleeping, or chatting in-between. Some incredible conversations.

Most people left later that day, but a handful of us remained, talking late into the night around the raging fire and finishing the last of the wine. Smothered in that sexy smell of wood smoke.

The next morning we feasted on bacon baps before packing the car, covering over the fire pit, and heading for home.

It was an incredible weekend, and some wonderful friendships kindled and renewed. 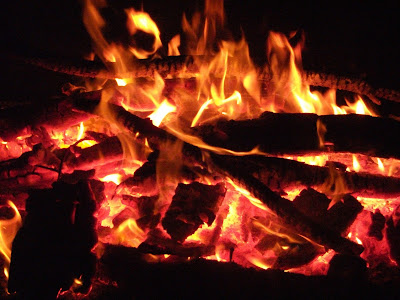