Ten hours to the ferry, two hour crossing, three hours home. Could have done it in less but the M25 to M4 West-bound junction was closed! My tomtom's answer to that was to drive me round in a big loop. It was still closed the second time. I could have wept. So I determinedly drove for a long time in the wrong direction until it picked another route.

I hadn't done much night driving in a long time and was hampered by two issues. One, I had a headlight out, and two - in a bid to save the environment, rather than lives, our government has turned off most of the motorway lights! Worse, on the exit from Dover, they've replaced street lights with glowing coloured bulbs in the road: red on the left, orange on the right and a sea of blue in the middle. It's like driving through a discotheque on acid. I had no idea what was going on! More like a video game than real-life driving.

At one point my vision was going a bit blurry so I stopped for a tuna-melt and a double espresso.

Anyway, here's some pictures from Dresden. I'm glad I stopped by, but being honest, it wasn't my favourite city. I stayed at the Park Inn - which wasn't exactly value for money. Having not made a booking in advance I paid full price, which I wouldn't have minded had it not been that, charging extortionate prices for a bog-standard room (think Holiday Inn), they then charged €8 a day for the car park and also charge for the internet. When you're peddling mediocrity you win points on the little things - free parking and internet being top of the bill.

It also tipped it down all morning, and the one place I was really interested in - the Green Vault - was closed for the day. So, not a great start. Instead I wandered around and looked at the sudo-old buildings. The city was flattened in 1945 and has been steadily reconstructed over the years. What is truly quite bizarre is that, given how new most of these old buildings are, they are caked in black - like genuinely old buildings. It just seems strange to go to all the expense of re-building these giant structures, and then not to clean them. Gives the place a slightly unloved feel. 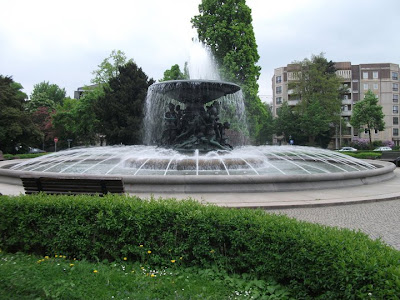 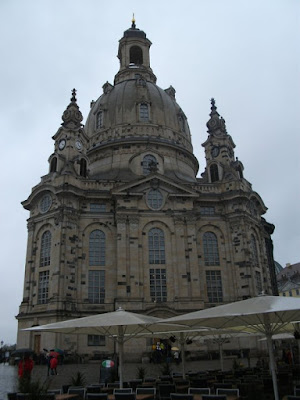 The above is Frauenkirche - the Lutheran church - reconstructed after the bombing in 1945. Completed in 2005.

The church withstood two days and nights of the attacks and the eight interior sandstone pillars supporting the large dome held up long enough for the evacuation of 300 people who had sought shelter in the church crypt, before succumbing to the heat generated by some 650,000 incendiary bombs that were dropped on the city. The temperature surrounding and inside the church eventually reached 1,000 degrees Celsius. The dome finally collapsed at 10 a.m. on 15 February. The pillars glowed bright red and exploded; the outer walls shattered and nearly 6,000 tons of stone plunged to earth, penetrating the massive floor as it fell. - Wiki 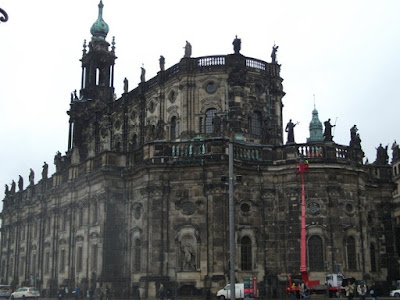 
The church was commissioned by Frederick Augustus II, Elector of Saxony and King of Poland. In the crypt the heart of King August the Strong is buried along with the last King of Saxony and the remains of 49 other members of the Wettin family as well as people who married into the family, such as Princess Maria Carolina of Savoy, wife of Anthony of Saxony.

The church was badly damaged during World War II and was restored during the mid-1980s under the East German regime. - Wiki 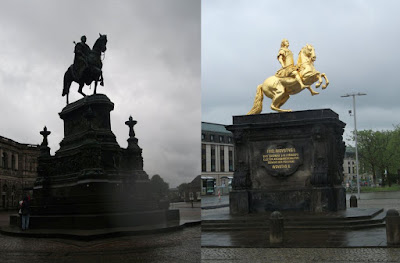 Impressive statues. The one on the left - not too sure who he is - stands outside the Semperoper. The one on the right is 'Augustus the Strong'. After going to all the expense of gold-leafing him, you can't help wondering why they didn't give the stones a bleaching whilst they were at it. Sort of spoilt the effect a little.


Really beautiful wall. The inscription apparently reads something along the lines of: A family of sovereigns whose line of heroes reach to this day. In olden times they were absorbed into our people's sagas. It's called the Fürstenzug or 'Procession of Prince', made from 25,000 Meißner porcelain tiles.

There's some great architecture in the city. I absolutely love these windowed bridges that connect the houses, and the large, imposing statues under this archway. 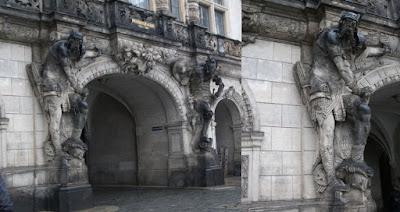 There were also a couple of modern things that caught my eye, including this waterfall and a cute piece of graffiti in the underpass. 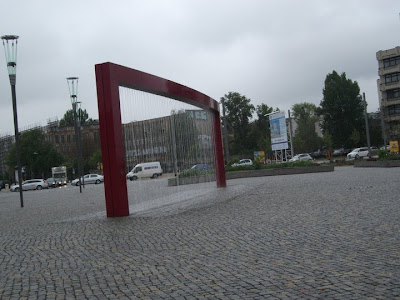 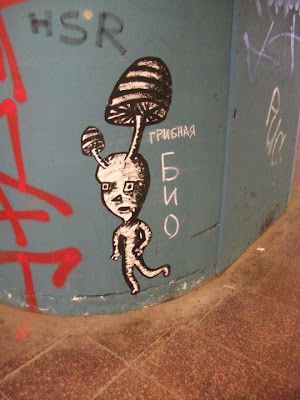 It was an interesting place to wander around, and it probably does look a lot nicer on a sunny day. Although the buildings are dramatic and imposing, I think I rather prefer the prettiness of Wrocław.
at 11:25