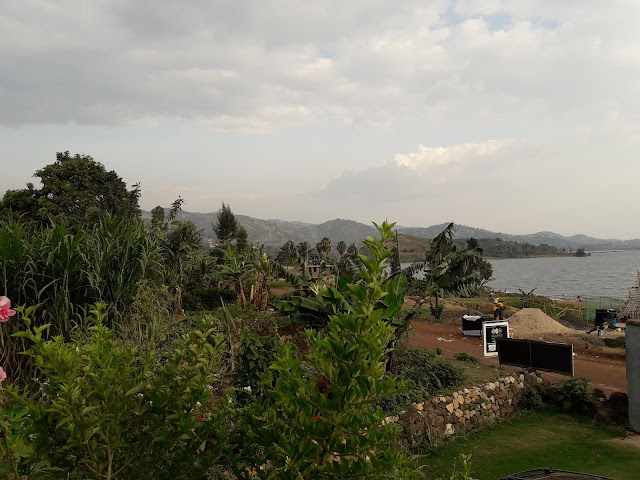 After our boat ride, we drove up country along Lake Kivu to Gisenyi, the northern-most border town with DRC. My friend Jo had very kindly gifted us her guesthouse at Rwandan Adventures, which has a really cute bike-themed suite. It looks right out onto the lake, as you can see from the picture above. 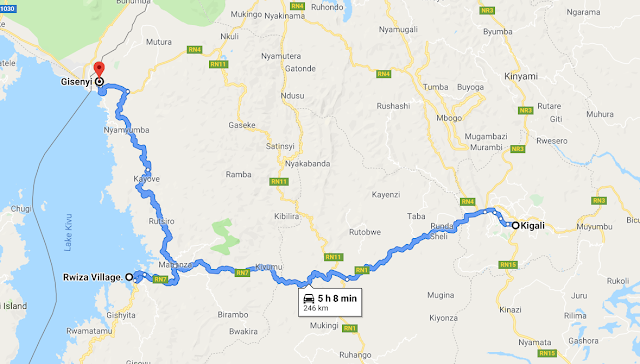 Once settled in, we took a walk down the road behind a group of builders who were headed home for the day. We settled ourselves in Paradis Malahide, a nice bar on the water's edge, for a well-earned beer. 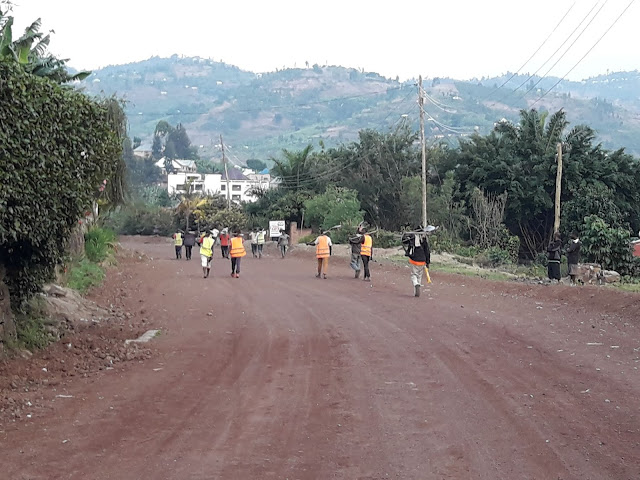 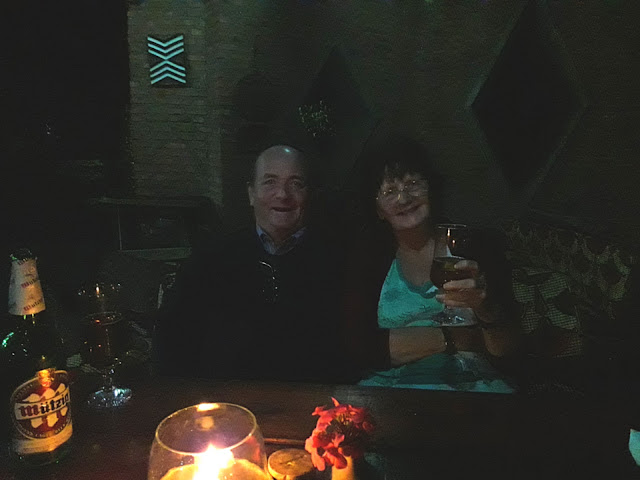 Due to some faffing about on my part, because I wasn't sure when Sameer would be back at Pfunda, the second guest room at Jo's place was occupied, so I booked into Inzu Lodge just round the corner. This is a place I'd heard a lot about but never actually been to. After making sure my folks were settled, I took a brusque walk to find my accommodation. Jo had built it up as some sort of tent in the middle of a field, so I was very pleasantly surprised to find a beautifully lit bar and an entire cabin awaiting me. There were indeed tents, but I had an upgrade. 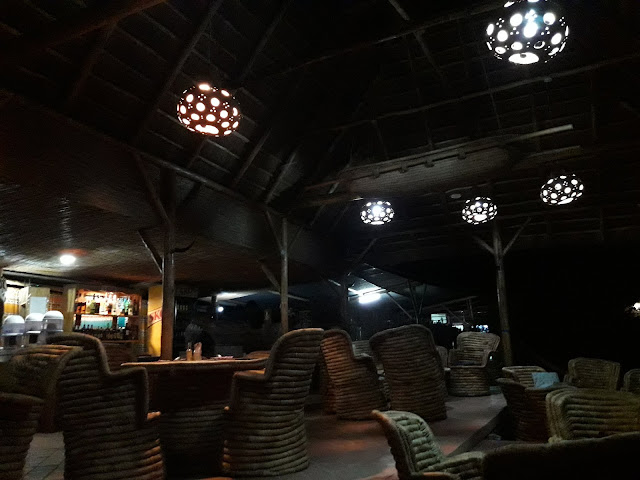 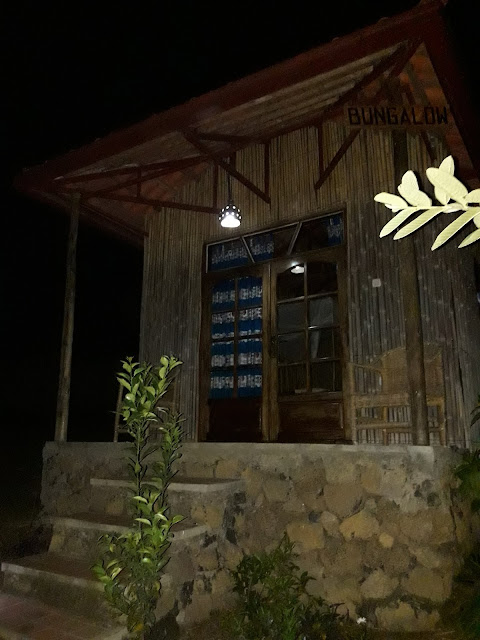 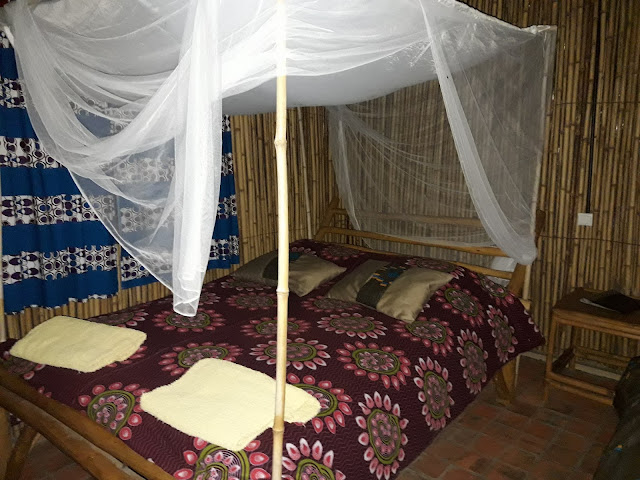 I was absolutely shattered. On attempting to lower the netting on the double bed, and failing, I unknotted the one over the single bed and fell into it. However, there was one crappy mosquito that kept dive bombing me, and around 3 a.m. I made another valiant attempt to lower the netting on the double and won. It was indeed luxurious and I should have persevered with that in the first place. Slept like a queen.

The bathrooms are communal and eco-friendly. Long-drop pit latrines with buckets of sawdust and lime beside them. Human waste composted and put on local plants to help them grow.  Reminded me a bit of Byoona Amagara. 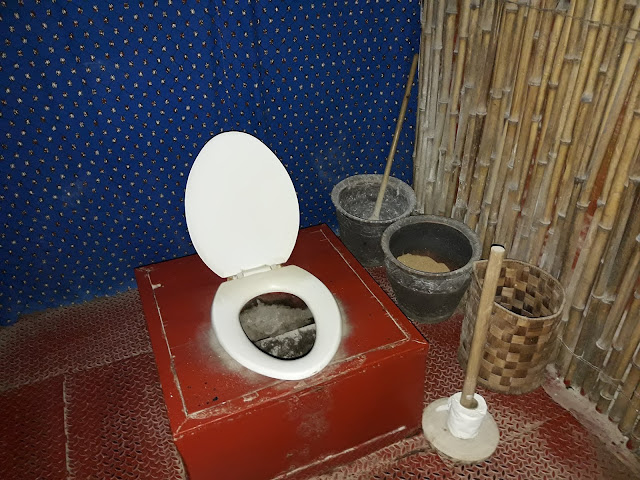 Breakfast was nice. Not included with the room, but a fair selection of yummy options. I went for the granola and yoghurt. And there was a pleasant view of the lake whilst I ate it. 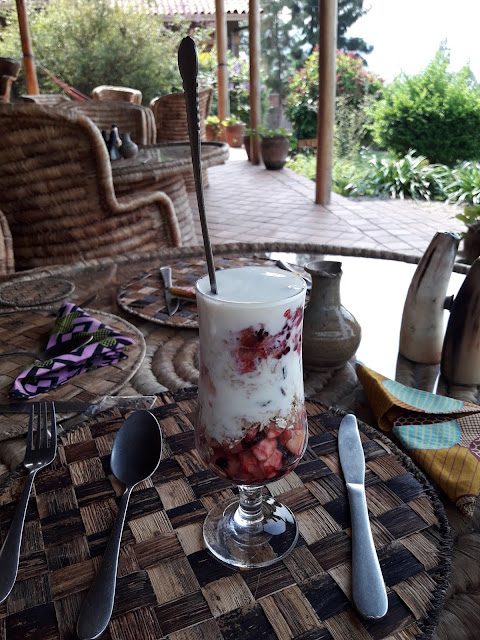 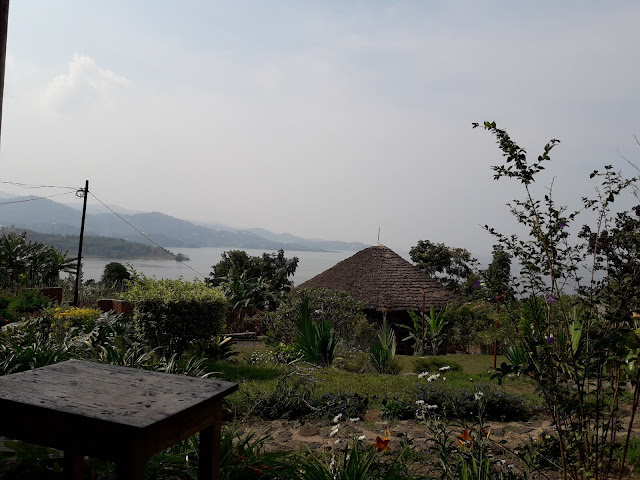 There was also a traditional royal palace up on the hill behind the restaurant. Asked Jo about that, but not too sure who it belongs to or whether you can visit it. 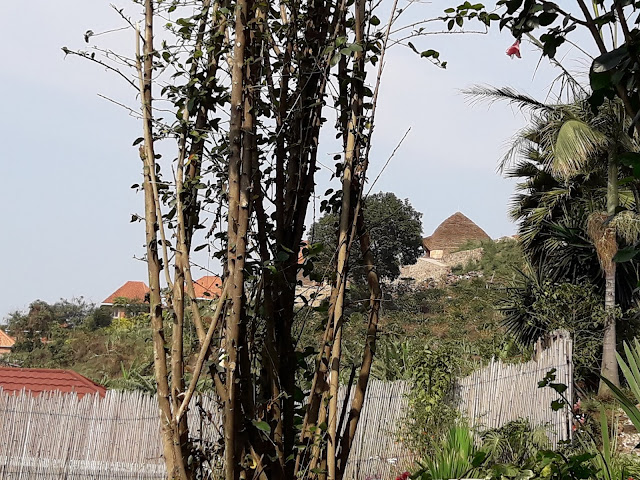 The next day, we headed over to Nirvana Heights, which is just a little further up from Inzu Lodge - it's all on the same road. They have a fabulous infinity pool there, although the music is often unpleasantly loud. It goes for more of a party vibe than a relaxing one. Buses sometimes pull up, full of people who just want to have a selfie taken standing on the edge of the pool. Jo says she once saw a group of people slip and fall in, mobile phones and all. 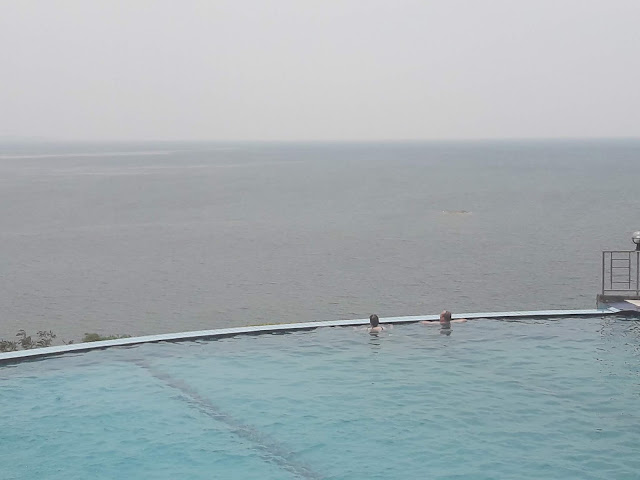 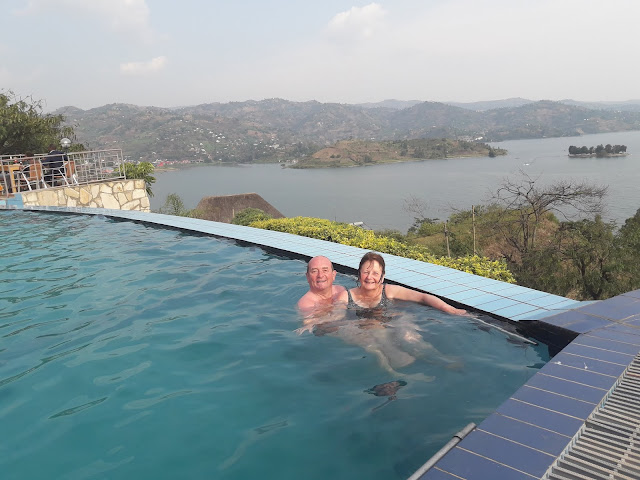 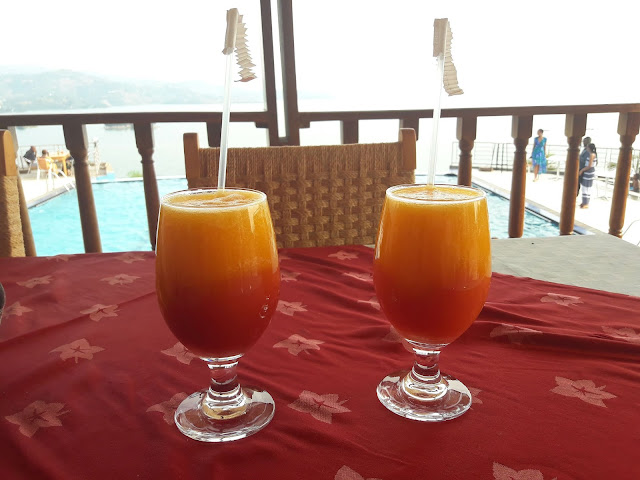 A very relaxing day spent by the pool.

That evening, Sameer returned from exile in Karongi. Jo was also in Gisenyi, so we all met up with my parents at Inzu for a beer and a bite to eat. It was a really nice night with plenty of laughter. Then my parents returned to Jo's and I went home with Sameer. We collected them in the morning for a tour of Pfunda Tea Estate.

We headed off to look at the marsh gardens first, the low-lying sections. 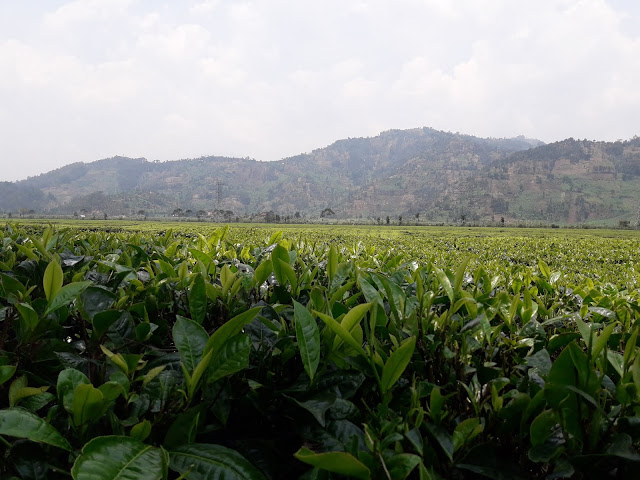 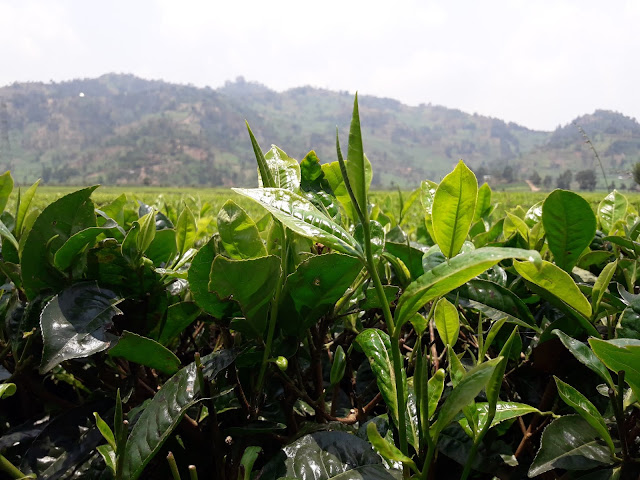 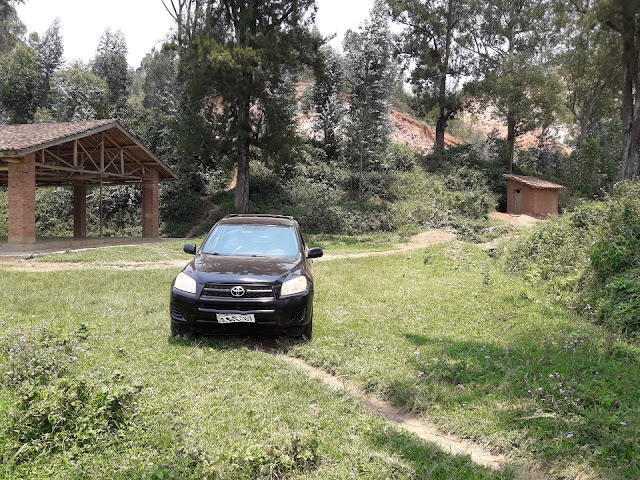 From there, we continued to the highlands, up on the border with Gishwati Forest. 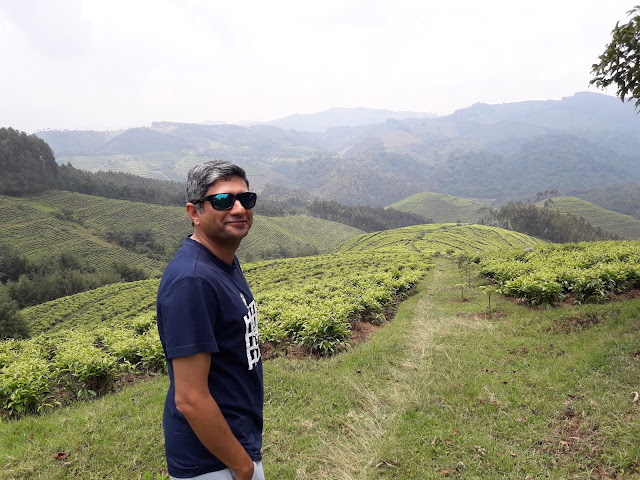 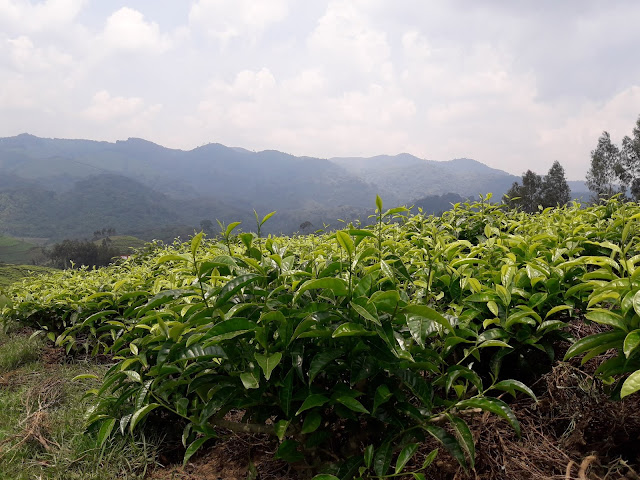 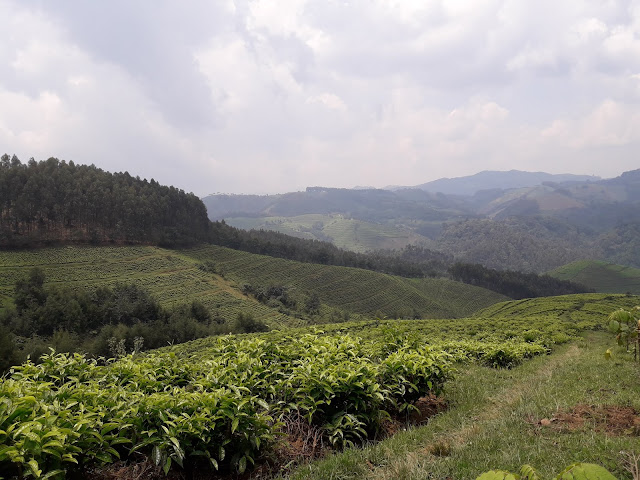 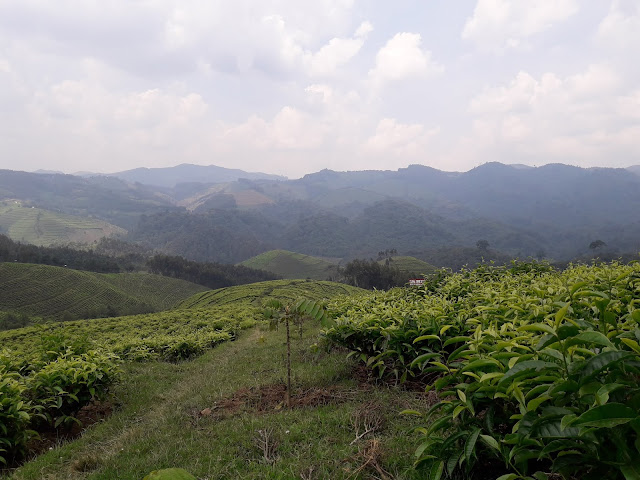 This is a picture he sent me of some baby tea trees he's planted. They're around nine months old. He's overseen the planting of around three-and-a-half million new tea trees at Pfunda since he's been there. 250 hectares at 14,000 plants per hectare. That's quite a legacy, considering people could still be drinking these leaves in sixty years' time. 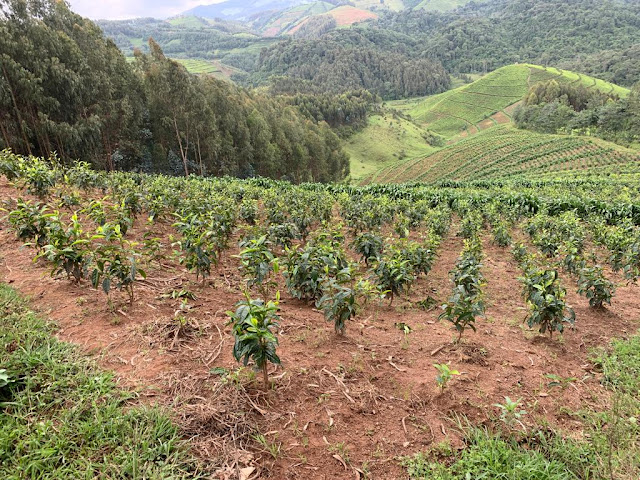 He's also planted some macadamias to see what happens, but apparently they're a bit slow-growing. 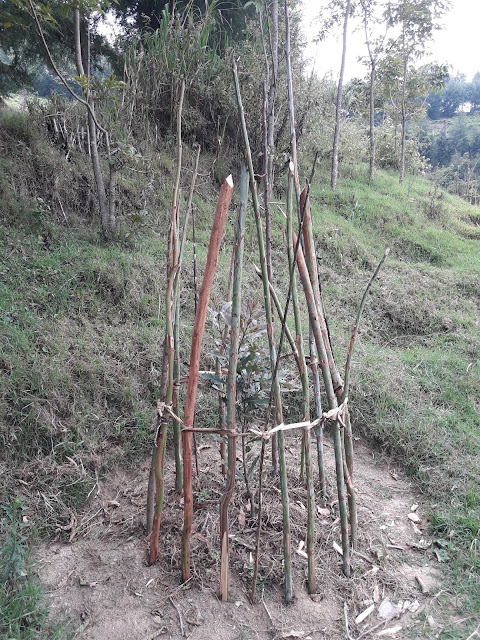 It was really interesting learning about the tea-growing process, and about sustainable eucalyptus forestry. The views in this area of the country are stunning.

We had lunch at Sameer's. His cook, Chantel, put on an amazing spread: fried fish, chicken, rice, chapati, dal, all washed down with gin and tonic. We'd bought some sugarcane on the way and had that for dessert. Here's a clip Sameer took of them harvesting it.

Then we retired to watch part of the India v. South Africa cricket match.

I drove mum and Merrick back to Jo's via the Golden Twenty Meters - this is Gisenyi's Golden Mile, but a bit shorter. A road along the beach with a load of bars. We stopped off at Lake Side to watch the sunset. I thought I'd taken a good picture, but mum's photo of the boat is stunning. 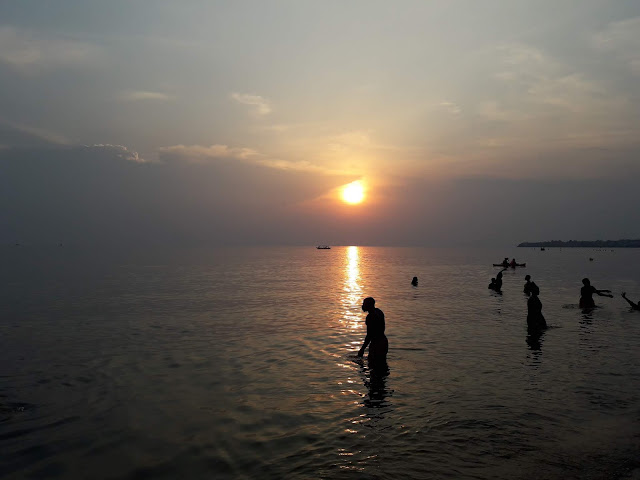