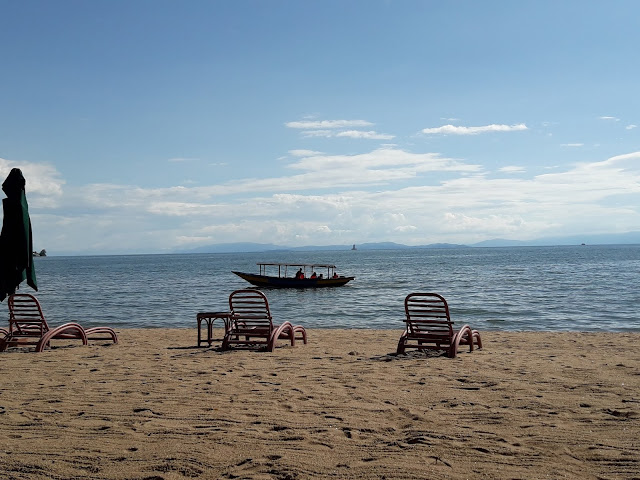 Well, it's been a funny couple of weeks. First with malaria, then the news of an attack in Musanze. Went golden monkey trekking there with mum and Merrick on Monday 30th September, and night of Friday 4th October, FDLR rebels crossed the border from DRC killing eight residents in Kinigi and injuring 18. Volcanoes National Park has one mountain, Sabyinyo, which is shared between Rwanda, Uganda and DRC. Security is usually extremely tight in the region, and you go primate trekking with an armed guard, so it was quite disturbing news that an attack had been carried out so close to the main tourism centre. Rwandan forces retaliated, reportedly killing 19 rebels.

Hopefully a one-off event. There were some bus attacks at the end of last year on the border with Burundi, with FDLR rebels reportedly taking refuge in Nyungwe Forest. Apparently, they have since been cleared, and Rwanda tourism board issued a notice soon after reassuring people that it was safe to visit the park.

Despite all this, travelling in Rwanda still feels extremely safe, although I prefer to take private transport long-distance rather than buses. Mostly because it's much more comfortable, but also because I usually travel north to Gisenyi and there were health concerns with the Ebola breakout (which has since been brought under control) and then passing through Musanze there's just a sense, rightly or wrongly, that you're a bit safer, or at least a bit more autonomously mobile, in a private vehicle.

That said... this week proved me wrong on one of those counts.

Poor Gizmo has a bad leg injury. He has an infected cut and was getting really feisty with me when I tried to help him. I wanted to go to Gisenyi for a few days, and as he wouldn't let anyone near him to treat him, I decided to drop him off with Dr. Arum so that he could heal properly whilst I'm away.

To solve some of my transport woes, I set up a group called Rwanda Carpool. There's a big problem with hiring cars in Rwanda. You can usually only hire a car from Kigali. There are no car hire depots in any of the other major cities, like Gisenyi, Cyangugu, Musanze or Butare. I only need to hire a car to get from Kigali to Gisenyi, then one to get back again when I'm ready - so, two days' hire. But because there isn't a depot in Gisenyi, I have to pay for all the days I'm there, even if I'm not using the car. That gets stupid expensive real fast.

The idea with the carpool was to try to reduce some of this expense by allowing people to offer a ride if they're going in the same direction. Seventy people signed up within the first hour!

The driver came to pick me up at 8:30 a.m. so that I could drop Gizmo at the vet and then go pick up my roadie. We were just entering a large roundabout near Sonatubes, about 10 minutes from the veterinary clinic, when my driver decides to cut straight in front of a giant cement lorry! I saw it happening in slow motion and could hardly believe what I was seeing. We were on the outside lane, for turning right, when we wanted to be on the inside to go straight over. Roundabouts are a fairly new concept here and lane discipline is non-existent.

The lorry was already on our inside. The sensible thing would have been to turn right, go down the road, turn around and come back to try again. Instead, my driver glanced to the left, must have seen the lorry (it was MASSIVE), then pulled straight across it. The lorry obviously hit us, the grill about a foot from my face, and proceeded to push us sideways around the roundabout until our taxi got free and pivoted into oncoming traffic.

I screamed for my life.

I was literally face-to-face with the grill of the lorry and fairly convinced it would drive right over us. Thankfully we were travelling at about two miles per hour and no real harm was done.

Within minutes we were on the side of the roundabout with the lorry in front. There were about five police officers and twenty spectators - not one of whom came to ask if I was all right. I just sat there in total shock, wondering what to do. 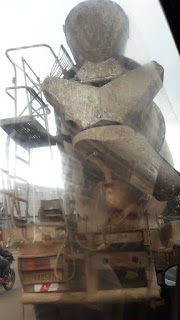 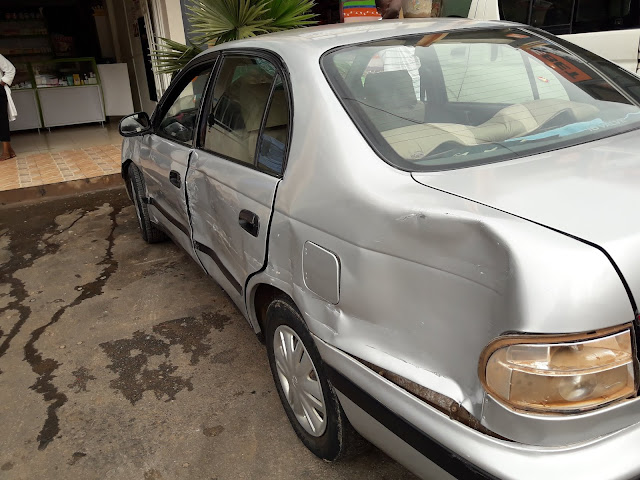 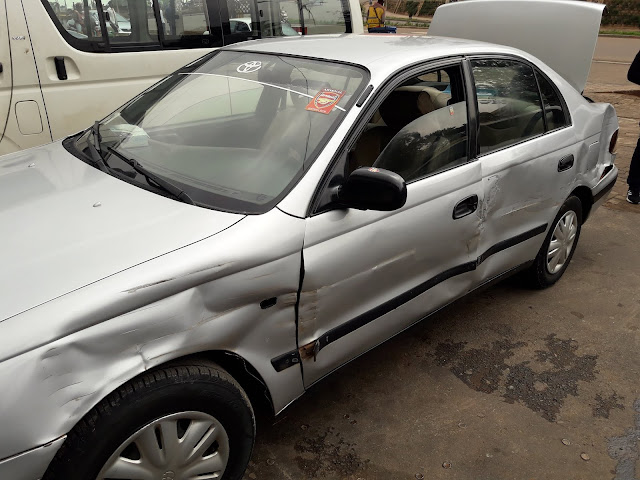 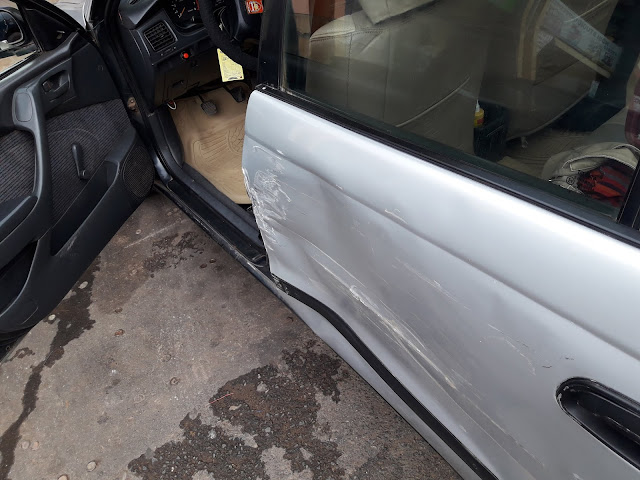 All things considered, we got away really lightly, and lovely little Gizmo kept his cool throughout the whole thing. My fabulous friend, Emmy, had his taxi not far away and he came to collect me. Took us to the vet's, where Thomas, my carpool accomplice, came to meet us. It was a bit of a weird text message: 'Sorry I'm late. Just been hit by a lorry. Need to find a better driver...'

Also ironic, almost getting squished by a lorry after I've been working so hard to get well again from malaria. Dad sent a smoothie maker out for me, and I've been packing it with bananas, tree tomatoes, Chinese lanterns, passion fruit, mango juice and frozen pineapple chunks. A smoothie a day to get all my vitamins and minerals, and easier to cope with than solid food. 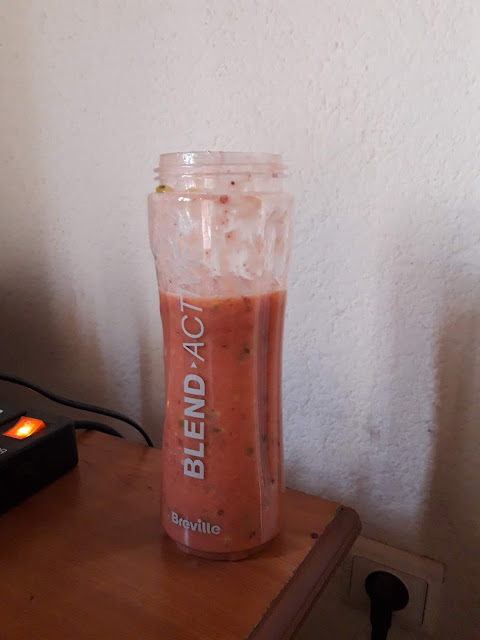 Also tried putting in a teaspoon of this moringa powder, which they were selling super cheap at the local petrol station. I was curious and decided to give it a go, as it's supposed to be very good for you. Turns out I'm allergic. Burning sensation, asthma agro. Oh well. Gave it away.

By midweek I was feeling a thousand times better and dragged myself to the European Business Association Meeting at CasaKeza, where we learned all about the new property tax laws, though I'm still not at all sure how they apply to my business - if at all. But there was a bonfire and free paella. Nice chance to catch up with friends.

After dropping Gizmo at the vet, me and Thomas climbed aboard Emmy's ride and headed north for Gisenyi. Sameer is leaving for a month on 20th and I wanted to spend some time with him before he goes. When we were just friends, we'd go weeks without seeing each other, now we try to see each other as much as possible, and a whole month without him is a daunting prospect. Thankfully, Harris arrives back on 28th, and possibly Ian, so I'm not going to be short of friends to hang out with.

Since arriving in Gisenyi, it's been raining almost non-stop. Seriously yucky weather. But yesterday there was a break in the clouds and a little sunshine appeared. We headed into town for food and relaxation. 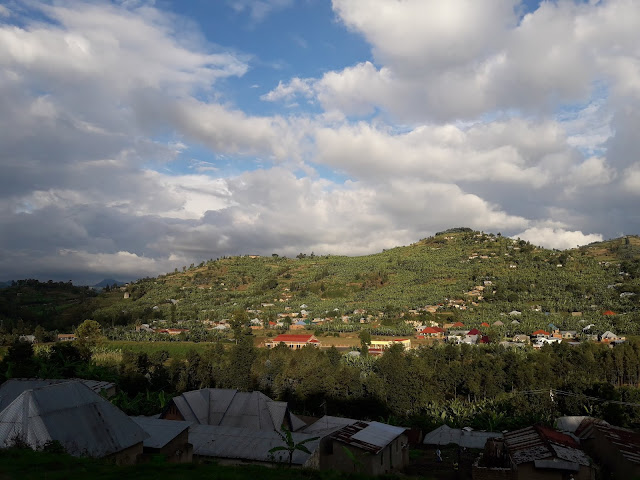 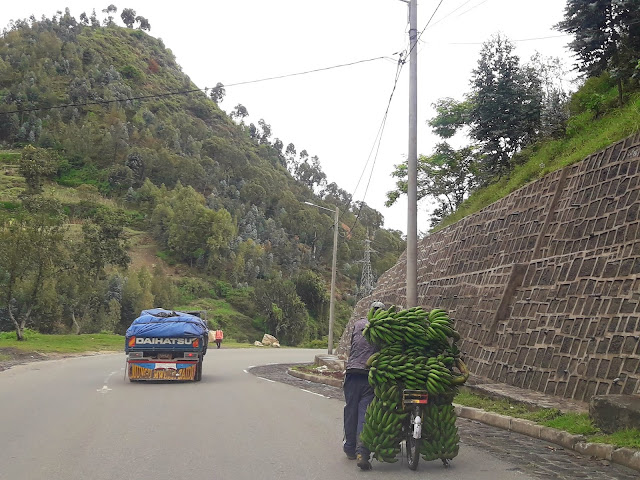 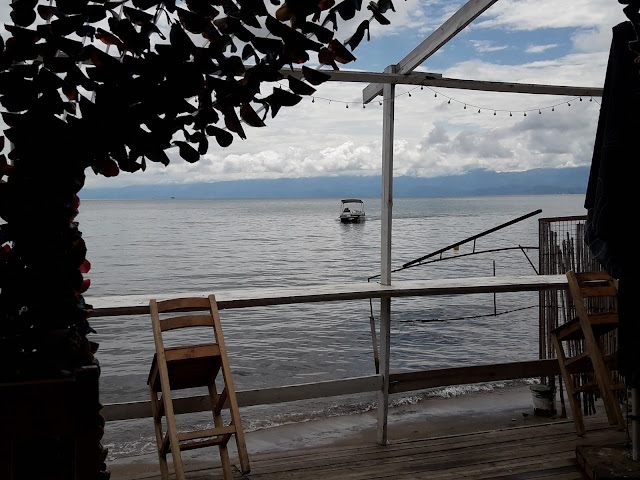 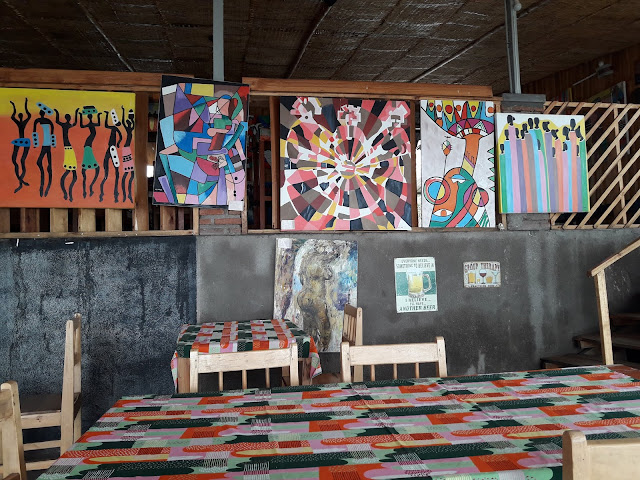 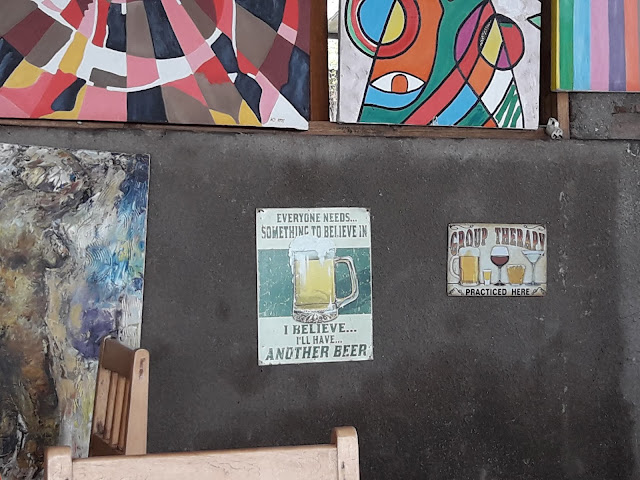 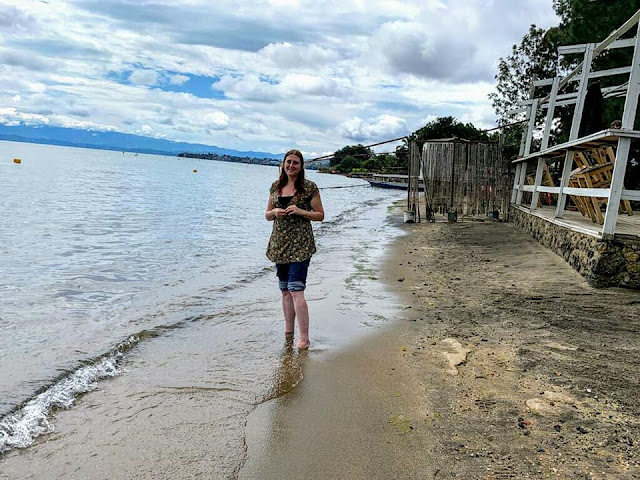 Then we headed over to Serena to sit by their beach and enjoy a traditional helping of apple pie and ice cream. Although Ebola is now under control in Goma, precautions are still being taken, as this poster near the border shows. As well as putting your bags through the security scanner at Serena, you also now have to wash your hands at a custom-made washing station just outside the door. I guess they get a lot of health staff and NGO types staying from DRC. 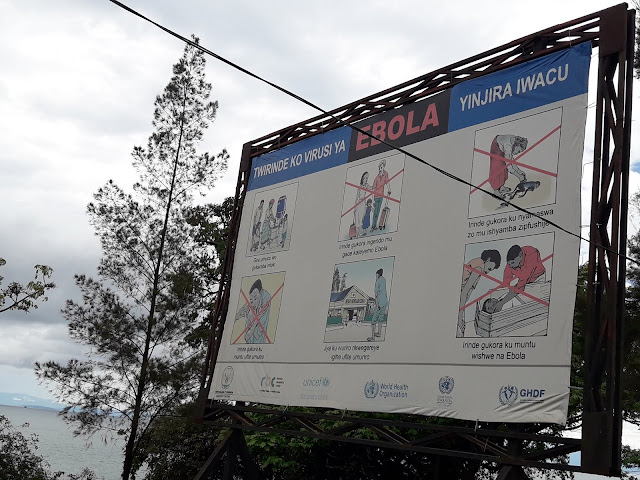 Still, it is a lovely beach, and it's a couple of degrees warmer in Gisenyi than at the tea garden, so we went for a paddle and enjoyed the afternoon rays. 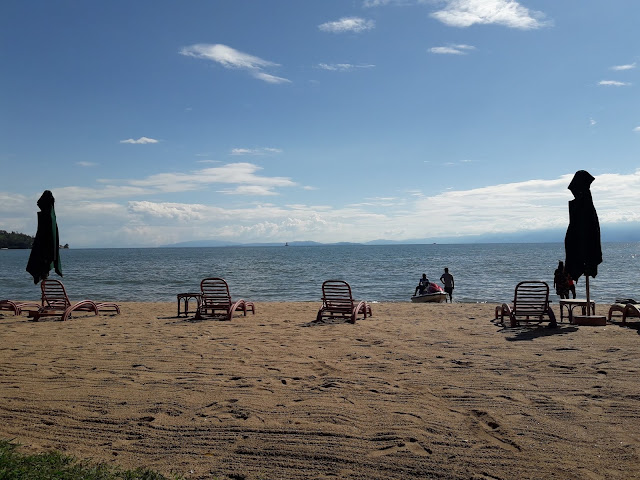 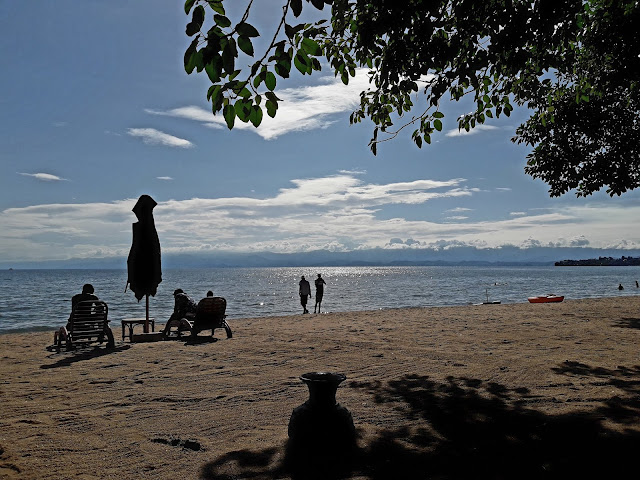 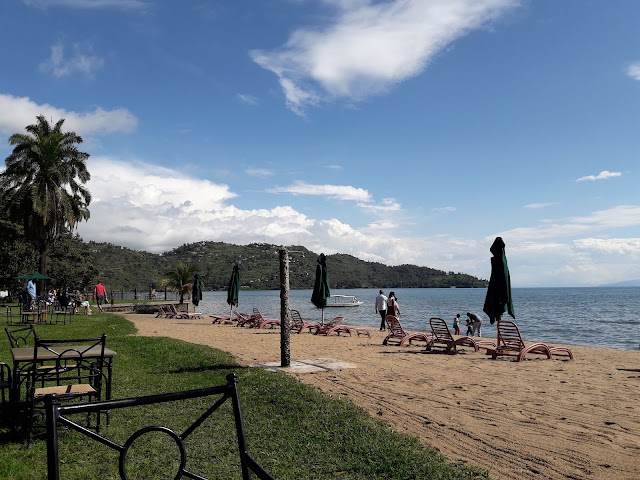 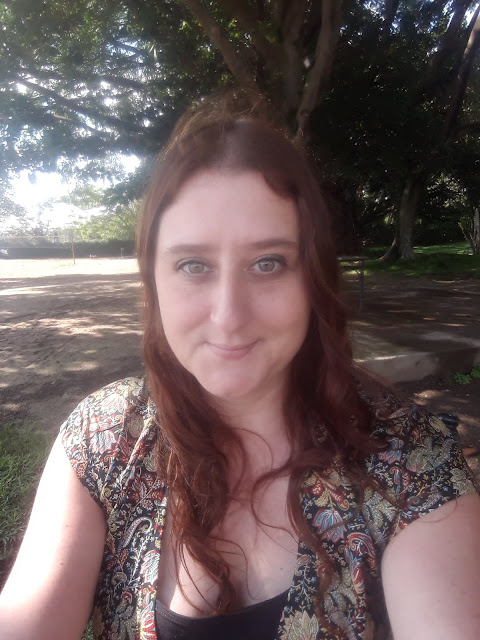 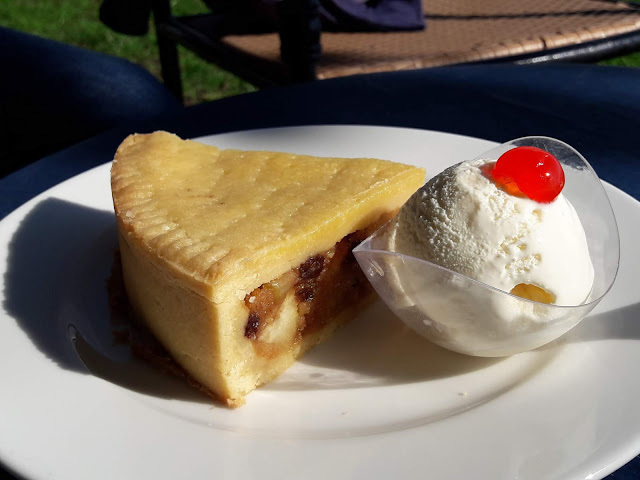 Just enjoying our last few days together, then he flies off home for a bit and I need to apply for my visa renewal. All a bit up in the air right now. Not sure what's likely to happen. All you can do is apply and see. Enjoy the sunshine whilst it lasts. 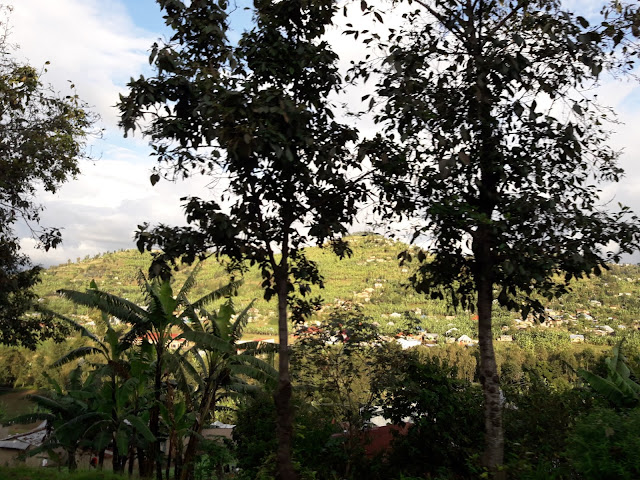