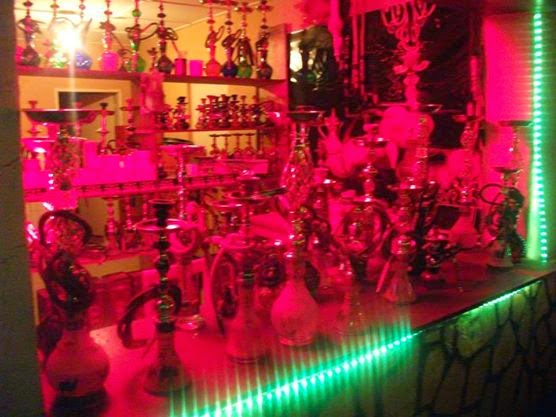 Slightly better shot of that bong shop at the Lebanese, where I ended up again last night with Jo and German friend, Nicole. Two mums on a night off. No shisha involved, but lots of hummus. 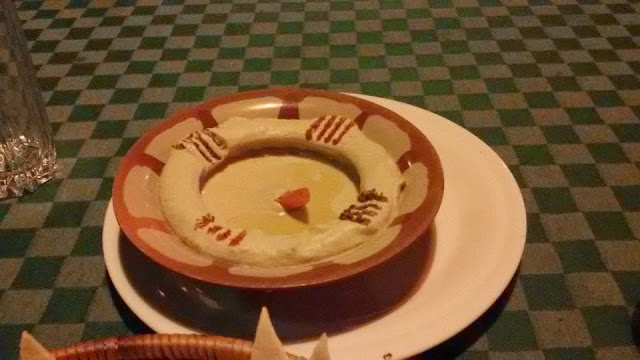 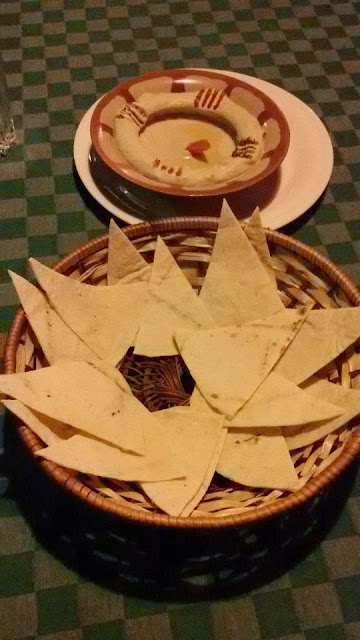 Finding it hard to eat again in the heat. Not quite as extreme as Laos, but pushing a pleasing 30c today. Had a chat to Dad & Marilyn the other day, who were experiencing a heatwave in the UK - 17c.

I am enjoying living in vest tops and three-quarter length jeans, but the lack of amazi takes the shine off it. For all its sparkly new buildings, some things in Kigali really haven't changed - namely regular power and water cuts. It's possibly the one area Nairobi outperforms on, and I was constantly shocked in Laos by the plentiful supply of water despite the soaring heat. It really isn't fun sharing a bathroom with three other people when you can't flush the toilet.

Also a bit fed up with my temperamental internet connection. I've been spoiled in Laos and Kenya.

If I can occasionally get a good connection in my room - why can't I always get a good connection in my room? Why do I need to sit in the garden if I want to send an e-mail at 9am, yet I can do it from my desk at 11:30pm? Going to give AirTel until the end of the month, then try an MTN connection. I'm willing to take slower in exchange for more reliable. AirTel is bloody fast, but out of a 1.5GB daily allowance, I'm lucky if I'm connected long enough to use 500MB.

Partly out of desperation, and partly out of curiosity, I decided to take myself down to Rwanda's brand spanking new library in search of wifi and a quiet place to work. This is definitely a new addition since I've been away, situated just off the roundabout by the American Embassy.

It looks absolutely stunning from the outside. 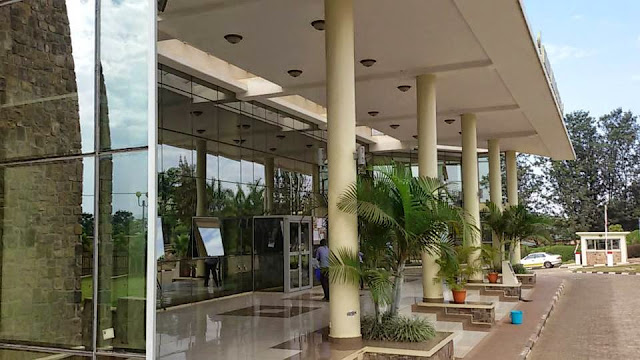 But as I approached, I noticed a little girl pushing something about with her feet on the porch. As I got closer, I noticed three little birds - two dead, one still alive but not moving!

The mystery deepened when I went inside, where you have to give your passport to a security guard, along with your bag. As he was taking my details, he took another sleepy-looking bird out of his pocket and placed it on the table in front of me.

It took me a moment to figure out what had happened. The front of the building is so shiny that the windows act like mirrors, reflecting back the sky. The little birds keep flying into them and hitting the ground, concussed (or dead). 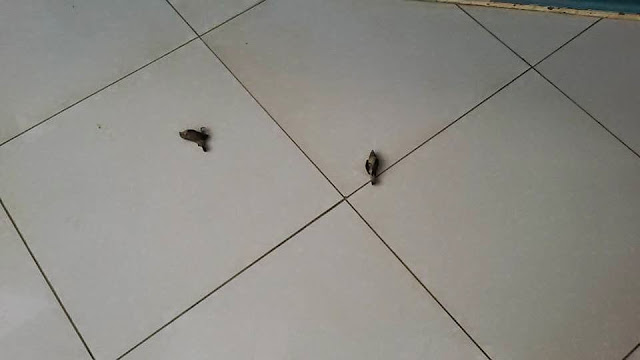 After going through the rigmarole of signing in, I decided to check out the café first. This involves walking out of the building, round to the back, and climbing three flights of stairs.


The roof has been converted to an expansive - and shockingly expensive - eating area.

Again, it looks beautiful, and there's an impressive view, all be it of a building site. 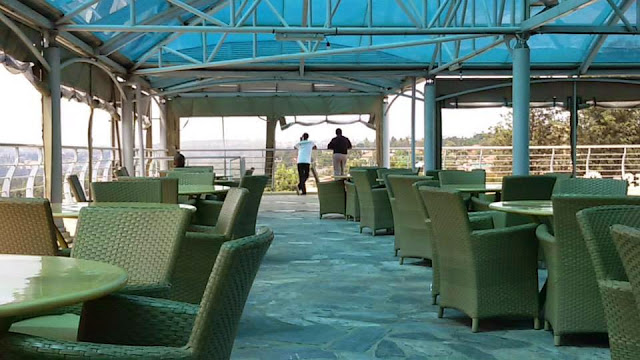 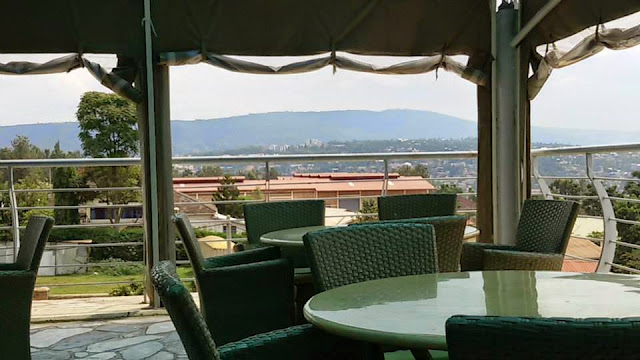 But there is also a major design flaw. Somebody forgot we're in Africa. There is no shade.

The roof is made of blue perspex, which is supposed (I assume) to dim the sunlight, but it also seems to magnify the heat, so you sit there feeling hot and squinting at your computer screen. It's not the most comfortable place to hang out. Also, the price of food is Bourbon expensive, when all you really want is a quiet place to spend the day, with reasonably priced coffee and a sandwich. It's not like people go there for a posh meal, just a break from studying.

Talking of quiet - there was cringeworthy 'just put me inside you, sex me baby' music playing over broken speakers, which kept interrupting the music with grating electrical disturbance. Eventually I had to ask them to turn it down so that I could concentrate - thankfully they turned it off.

Again, not conducive to a study environment.

There was apparently a wifi connection, but when I asked for the password, nobody knew it.

Come on, seriously? What is the single thing every Rwandan and Muzungu wants when choosing a restaurant? Other than food, it's always, without exception, an internet connection. Nowadays, we choose where we eat largely based on the reliability of the internet. 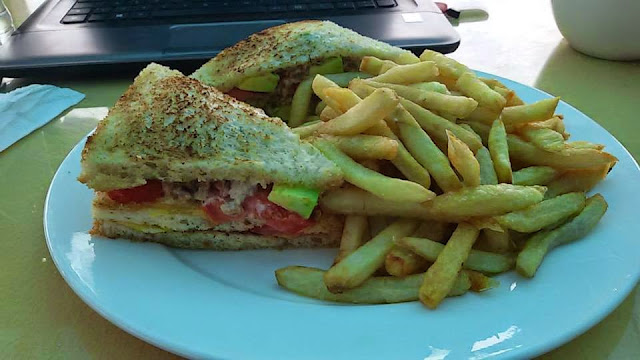 So, I ate my very nice but heavily over-priced (for a library) food, drank my coffee, sweated, squinted, attempted to use the (broken) toilet, and eventually decided that it would be much cooler and quieter inside the library.

It is very pretty inside - everything laid out as you'd expect in a modern library. I headed for the reading area, where there are desks and rows of plug sockets.

None of which work.

Four of them - no juice from a single one.

You'd be mistaken for thinking there was a power cut, but Jo's friend last night explained that whenever she works at the library, she takes her own extension lead. When she finds a socket that works, she plugs it in and everyone else uses the spare sockets.

As my battery was running out, and I still didn't have a password for the wifi connection (or a reliable signal from AirTel - in the national library!) I decided I'd had enough.

All a bit disappointing considering the place looks so nice - it's just not really geared to what library users want or need.

On top of that, I almost walked out without my passport.

I'm also in a slightly grumpy mood because RDB online business registration isn't actually as easy as they made out. I've had a notice through that my business name is already taken, and I need to think up a new one. This affects both my domain name (no hassle, only about £4 a year) and my logo design (again, no hassle, my friend is patient and lovely). But - single most obvious question here: why don't they run a name check whilst you're registering. Isn't it fairly obvious that there should be a list of registered names that you can check before submitting a new one? Wouldn't that save a lot of time for everybody involved?

Still, at least you can submit changes online instead of having to go back and forth to the office all the time, and the lady at the front desk has been very helpful and quick at responding to e-mails.

Thinking up a business name isn't as easy as it sounds. I'm a little devoid of imagination at the moment. Not sure whether to go with a Swahili/Kinya name, or something English. Think I'll just mess about on Facebook and drink coffee instead, from my new T2000 cafetiere. 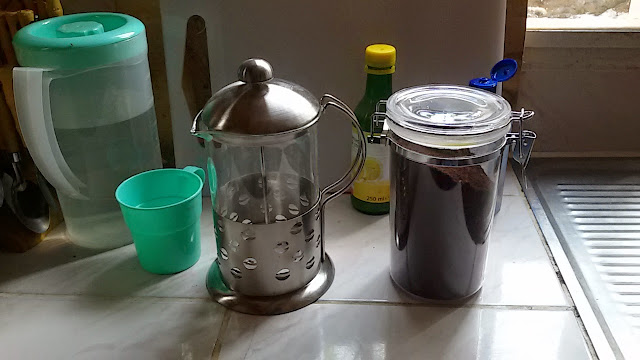 [UPDATE: Kigali Library has really improved upstairs since last year. Still not sure about disability access, but the government are working to improve library services, and it shows.]
at 15:26