(Windy horses foaling around outside my kitchen window. )

One of the loveliest things about this house - and there are quite a few - is that there are horses right outside my kitchen window. I get to breakfast with them.

As I also sit and write at the kitchen table most of the time, the sound of their calm snorts and playful hooves prove a constant companion.

There's something awe-inspiring about the strength and grace of horses. These two are very friendly, coming up to greet me when I step outside the door.

Today, I went for a walk around the village. From my garden I can see an old church, and around the corner you can enter it through a bright yellow courtyard.

Something else that I discovered were the German Second World War graves. After visiting the British First World War ones at Ypres, and Great Granda' Tom, it was strange to stand in East Germany looking at the fallen on the other side. They were mostly later into the war, from around 1944 onwards, and often the same family names over and over. Very sad. 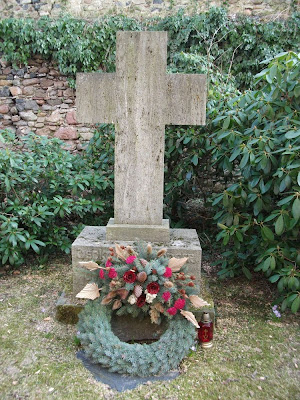 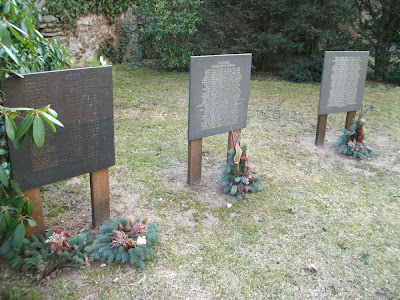 After that, I continued along the village and found a nice walk over the fields and along the river. It was gloriously sunny, which was nice, as it seems to alternate between sunshine and grey downpours each day. There has even been snow! Spring seems to be lagging behind England here - there's still snowdrops in my driveway, whilst dad is talking about his daffodils back home.

The other thing that is noticeable is how flat the land is around here. There were some very high mountains on the drive up, but now it's straight horizon in every direction. Quite a nice feeling. 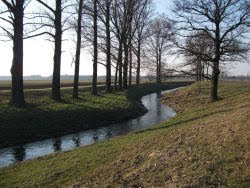