This was where Hyur Tourist Company came into their own. For the equivalent of around £40 I hired a 4x4, driver, and English-speaking guide for the afternoon and headed off to see what Armenia had to offer.

It's hardly any surprise that I leapt at the chance to see the last Pagan temple in Transcaucasia. Hyur do a package tour, so I also went via an astounding monastery.

Geghard is a 4th century monastery, carved out of the same mountains where early Christians hid in exile. According to another blog: "...it was built to house a relic, a spear of Jesus' body."

You arrive along a winding road through the hills, past a stone statue of a lioness. She is a symbol of strength and protection, welcoming all who visit, as the monastery was also a safehold. The hills are surprisingly green. Trees were planted around the 5th century by the King at the time, who wanted a forest populated by woodland animals for the aristocracy to hunt.

Click any of the pictures for a better view... 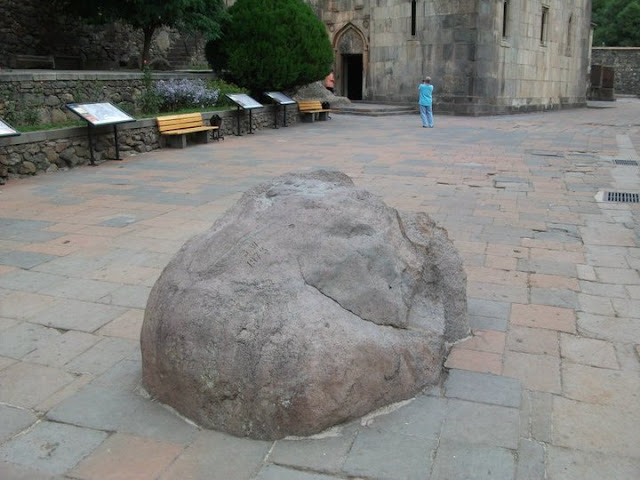 This rock fell out of the mountains during one of the many earthquakes throughout history. As it didn't kill anyone, it was left there as a symbol of good luck. 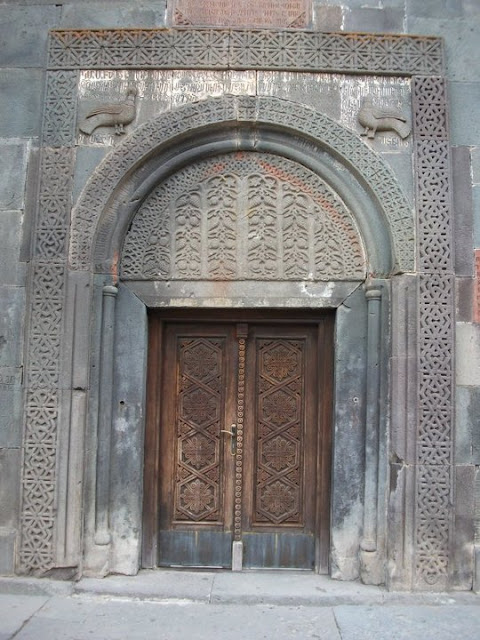 Talking of earthquakes (and I've done quite a bit of talking about earthquakes) the ornate carving around this door isn't just beautiful - it's actually stress absorbent, and was apparently created as a stability measure against earthquakes. Must have worked as it's still standing.

In one chamber there was a natural spring, considered holy. People come to fill up water bottles and wash themselves. I just had a little sip and dipped my feet, hoping for a safe journey ahead.

Talking of sacred springs - look what else I found outside:

Can you spot the wishing tree (top right)?

Geghard has some truly amazing architecture. It wasn't until I got home that I realised I was being watched...

The most memorable moment came right at the end. Shortly before leaving, I ascended some steps into a cave at the very back, where a women's choir were singing. It was like nothing on earth. The entire mountain reverberated with their voices; drowning in sound. So beautiful.

Outside were several stalls selling fruit sujukh, which Makrita describes as an 'Armenian Mars Bar'. It's a string of walnuts covered with dried grape juice. Like a big sugary candle. I sat munching on it all the way to Garni.

I was extremely excited about going to Garni. As I mentioned, it's the last standing Pagan temple in the whole of Transcaucasia. It was built towards the tail end of the Pagan era, around 300 BC, but was settled around 3,000 BC - when a lot of stone circles were being erected in the UK, including Stonehenge.

The temple was dedicated to Mithra (known in Armenia as Mihr). Funnily enough, I had just finished reading Jeff Lindsay's third novel in the Dexter series: Dexter in the Dark. It added an extra, entertaining, dimension.

The interior is very small. A stone slab is missing from the floor, where they used to light fires. It would have been incredibly hot inside. The crowd would gather for sacrifices, but no blood was allowed to be spilt inside the temple, so they erected sacrificial plinths outside. Practical thinking.

The carvings apparently depict Atlas, holding up the sky. He faces East and West towards the rising and setting sun, depicting the birth and death of life.

It is said that the reason Garni was spared demolition was because the King's wife asked for it as a gift. She considered it to be the most beautiful of the pagan places. A Roman-style bath house was built there. Steam would filter through into three rooms of varying temperature. The mosaic held an inscription which read: "We worked but received nothing." Nobody is entirely sure whether this was a disgruntled message from the masons, or a tongue-in-cheek comment that 'now work is over, we'll relax in the bath house'.

The last beautiful surprise was this:

As well as being the first country to turn Christian, Armenia also holds the first recorded Swastikas (Sanskrit: to be well). This astounded me, as I had always thought it to be India. My guide explained that, unlike some traditions, it doesn't matter which direction the symbol is spinning in Armenia, both directions mean good luck.

I felt unbelievably privileged having the chance to see this ancient site. I had expressly gone there to see the temple, but discovered Geghard en route. It was an incredible day. I fully admit that, when I received the posting, I wasn't entirely sure where Armenia was. I couldn't even name its neighbours (Turkey, Georgia, Azerbaijan and Iran). However, having been, I would hugely recommend everyone to go. Tomorrow. Book your flight!

Email ThisBlogThis!Share to TwitterShare to FacebookShare to Pinterest
Labels: Armenia