This is an extract from my African travel blog, where you can read all of my adventures in Rwanda.


What an AWESOME couple of days!

Bizidanny's driver, Amos, turned up spot on time to pick us up at 10am after another leisurely morning. Really nice guy, and the drive up to Ruhengeri was a lovely way for Dad and M to check out the rural scenery.

Slight uncertainty when we arrived. We'd booked into The Gorilla's Nest Lodge, but ended up in the cheaper hotel: La Palma, which was still very nice. According to people we met today, The Nest is in serious need of some renovation. I was annoyed though, as we hadn't been informed of this change and we'd paid. Luckily I still had the receipt. Although the phone network was down, I managed to send Danny an e-mail. He miraculously turned up later that evening to sort it out, and explained that The Nest had trebled its prices since we booked - still would have been nice to know, though.

After check-in we had food at the restaurant where we ordered three ibirhy (Irish potatoes)... and got three plates of ibirhy! More potato than you could ever eat! I tinfoiled it up and brought them back for the cats! Then we took a drive to visit the twin lakes, Bulera & Ruhondo, which were utterly stunning!

The rooms at the hotel were good. I languished under a hot shower for the first time in four months, then we ate at the restaurant where we shared a very... uh... 'interesting' pizza, which was basically tomato sauce and cheese in a bowl. Nice try though, guys :op

Last night was a pretty heavy rain storm. It's just about the end of the Long Dry Season and the Virungas are a wet region due to the altitude. Thankfully, it had cleared up by morning and we were up and dressed by half-five for a 6am start. Fast breakfast of omelette, then into the van and off to the Virunga National Park.

There were surprisingly more people there than I expected. Eeven so, one of the guides said it was a 'quiet day' - usually they have between 70-100 people.

You can only visit the gorillas in groups of eight, and you get one hour with them. Our group was great fun: two Americans from California and their daughter Leah, and two Aussies. All with a great sense of humour. We kept each other going up the steep ascent into the Rwandan jungle. 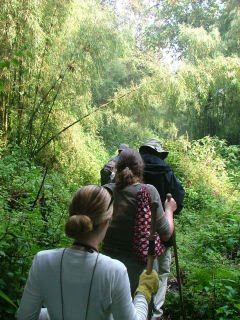 We eventually found the Sabyinyo family enjoying an early-morning graze in open pasture. They walked right past us and we followed them up onto higher ground. They were completely unafraid of us. They must have seen hundreds of tourists by now! Led by their silverback: Guhonda. 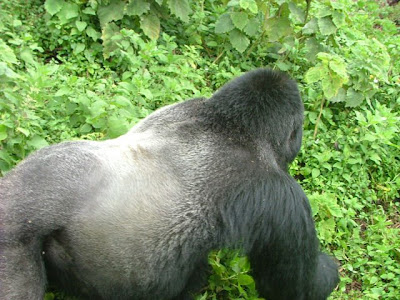 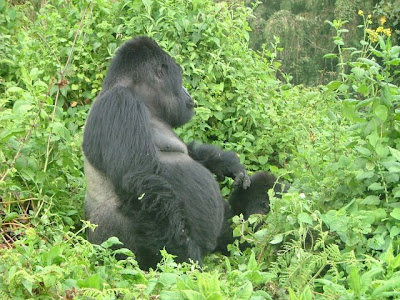 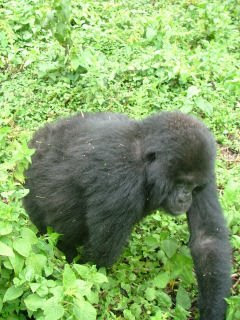 It was an awe-inspiring time. We watched this giant just sit there, stripping huge thistles with his enormous hands (about the size of my head) and munching away happily, only casting us the occasional curious glance whilst his missus nursed their newest arrival. 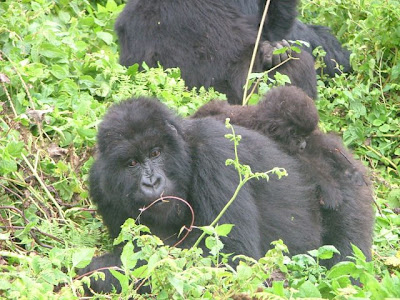 We even learned a few words of gorilla to say that everything was peaceful and 'stay away' if they got too close. Apparently they can make 16 different noises to communicate. Such incredibly, sentient, beautiful creatures. I couldn't believe how close we were in both distance and DNA. 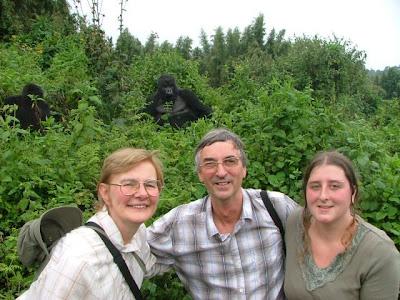 Eventually, we made our way back down the mountain and headed to the lodge to receive our certificates. It was a magical experience. Those unsure whether to spend the money - go for it. It's unforgettable.

After the trek, Amos drove us back to Kigali where we went for a celebratory slap-up meal at India Khazana. I got them to sing the birthday song for M. This involves all the lights being turned out in the restaurant (if you don't know, you think it's a power cut) the fairy lights coming on and all the waiters sing Happy Birthday, first in English, then French, then Swahili, with the 'jambo' song. It's quite spectacular and they bring you a plate of ice-cream :op